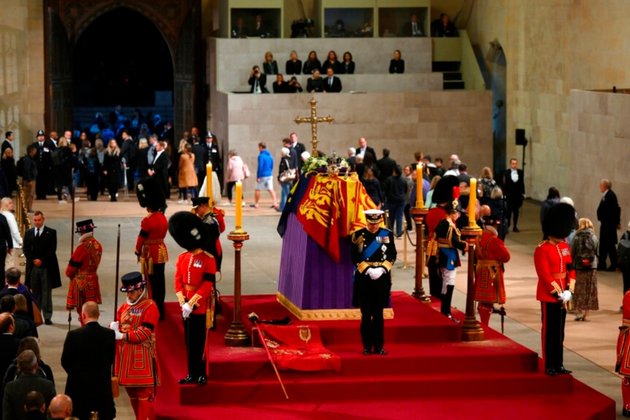 London – King Charles and his siblings stood vigil by the coffin of their late mother Queen Elizabeth II on Friday as tens of thousands of mourners queuing to pay their final respects as she lies in state were told they faced a wait of up to 24 hours.

Charles, Princess Anne, Princes Andrew and Edward, attired in military uniforms, stood in silence with their heads bowed for the 15-minute vigil at the historic Westminster Hall where the coffin of the late monarch has been lying since Wednesday.

Most of the other members of the British royal family, including some of the queen’s great-grandchildren, watched from a gallery.

Tens of thousands of people of all ages and from all walks of life have filed past the coffin in a constant, solemn stream to pay tribute to the queen, who died in Scotland on September 8 at age 96 after a 70-year reign.

Despite the warning of how long it would take to reach the building, mourners continued to join a well-organized line that stretched along the south bank of the Thames, then over the river to Parliament’s Westminster Hall, knowing their wait would last through the night when temperatures were forecast to be cold.

‘We have been overwhelmed by the tide of emotion that has engulfed us and the sheer number of people who have gone out of their way to express their own love, admiration and respect to such a very special and unique person,’ Prince Edward, the queen’s youngest son, said in a statement.

People queue to pay their respects to the late Queen Elizabeth II, who is lying in state at Westminster Hall in London, Sept. 16, 2022.

Rosie Beddows, 57, from Sussex, had queued with her husband and son, and happened to pass by the coffin when it was being guarded by the royal family.

‘It was absolutely amazing, so moving, so beautiful. It was an incredibly long day, but we saw the king,’ she said, sounding elated. ‘I can’t believe it. I think he’s going to be a brilliant king.’

Despite the warning of lengthy queues, repeated across local rail stations, people had flooded into Southwark Park to join the line, many in high spirits. In contrast, those who emerged from Westminster Hall were quiet, reflective and a little stiff.

Among their number was former England soccer captain David Beckham, who looked tearful as he waited to file past the coffin, having queued for more than 13 hours on his own, snacking on crisps, sweets and doughnuts.

‘We were all here celebrating her majesty today and it didn’t matter how long we were there,’ said Beckham. ‘We were there for a reason. And everyone was together. It was a special few hours.’

New Zealand Prime Minister Jacinda Ardern, in London for the funeral, was another of those who visited Westminster Hall on Friday, stopping to curtsy as she filed past the coffin.

More than 750,000 people in total are expected to file past the coffin ahead of the state funeral on Monday, which presidents, prime ministers, royalty and other world leaders are due to attend.

U.S. President Joe Biden, French President Emmanuel Macron and the leaders of Australia, Canada and Jamaica will join the emperor of Japan among the congregation.

London’s police force said the funeral would be the biggest security operation it has ever undertaken.

Police officers are backdropped by a photograph of Queen Elizabeth II in London, Sept.16, 2022. The queen will lie in state in Westminster Hall for four full days before her funeral on Sept. 19.

Charles, who acceded to the throne on his mother’s death, earlier visited Wales on Friday, the last stage of a tour of the United Kingdom to acknowledge his status as the new monarch and head of state and to greet the public.

Charles and his wife, Camilla, the Queen Consort, attended a service at Cardiff’s Llandaff Cathedral, then talked with cheering well-wishers outside.

Wales has a particular significance for the new king, who for five decades preceding last week’s accession had the title Prince of Wales.

Similar small protests have been held outside parliament in London and in Edinburgh over the past days, although Charles has enjoyed a surge in support since he succeeded Elizabeth.

Later, the new king returned to London to meet faith leaders at Buckingham Palace, where he said he was determined to be ‘sovereign of all communities.’

As monarch and Supreme Governor of the Church of England, Charles holds the title ‘Defender of the Faith,’ but he said he his saw his role as stretching beyond his own strong Christian beliefs, and that he had a duty to protect diversity.

‘By my most profound convictions, therefore – as well as by my position as sovereign – I hold myself bound to respect those who follow other spiritual paths, as well as those who seek to live their lives in accordance with secular ideals,’ he told the faith leaders.

‘I am determined, as king, to preserve and promote those principles across all communities, and for all beliefs, with all my heart.’

Following the vigil of the queen’s children on Friday, her eight grandchildren, including the new Prince of Wales, William, and his brother Prince Harry will stand vigil at the coffin on Saturday evening.

In an adjustment to protocol, both Harry and his uncle Prince Andrew have been allowed to wear military uniforms when they take their turns, royal officials said.

Both are war veterans, but so far only “working royals” have appeared in uniform while Andrew and Harry have appeared in processions in morning suits after they lost their honorary military titles when they stepped back from public royal duties.