US views India ties as ‘most consequential’ 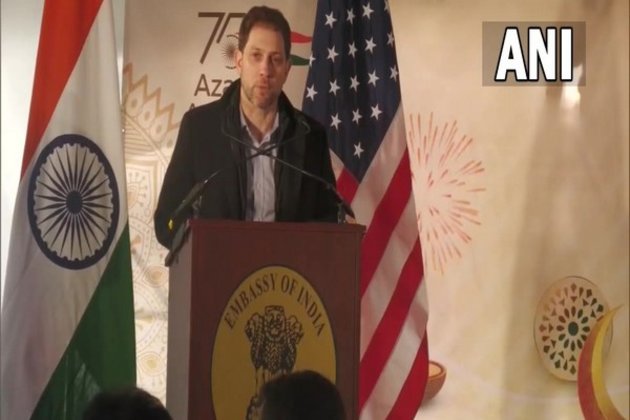 Washington [US], November 22 (ANI): The leadership of India and the United States have often reiterated their commitments towards staying ‘strong and indispensable’ as bilateral partners.

As the Deputy National Security Advisor of the United States, Jon Finer recently commented on the huge potential for the strengthening of India-US ties over the next year, he also highlighted that this year has been significant in the partnership between the two nations.

Speaking at a lunch reception to celebrate the festive season at India House in Washington, Finer said, “2022 is a highly accomplished year and having an even bigger year to come is really emblematic of how this relationship has proceeded for decades now. We at the White House, the entire administration certainly President Biden see this as among the most consequential relationships with the United States anywhere in the world, but also almost uniquely one of the relationships that still retains some of the greatest potentials to continue to evolve and strengthen and improve. We are deeply committed to doing just that.”The year 2022 brought with itself many challenges on the diplomatic front. It was assumed that the different positions that India and the United States held on the Russian war in Ukraine may hamper the bilateral relations between the states.

However, as has been the basis of international politics, the states are guided by national interests. In this regard, India and the United States have a lot to gain from a strong bilateral relationship. The major testament to this is the fact that despite differences in the position on Russia, India-US relations have been strengthening to a large extent.

India is all set to take up the seat of the President at the G20. This will give a centre stage to the country in developing consensus over economic and financial cooperation issues. As the present G20 Summit concluded recently, the United States’ administration also applauded the efforts of the Indian delegation headed by Prime Minister Narendra Modi for their role in ‘forging a consensus’ over a joint statement among the member countries. This paves the way for a greater role to be played by India during its Presidency next year as well and it is well in the interest of the United States to maintain closer ties with the country.

Despite the challenges of a dwindling global economy, humanitarian crises aggravated by the war in Europe as well as the resulting energy and food crises, there has been a crucial focus between India and the United States to build bilateral ties even further.

“Looking around the world, when US and Biden look for partners that can truly help move forward a global agenda, India and PM Modi are very high on that list. We are really excited about what is to come in this relationship, and we are committed to moving it forward,” said the Deputy NSA.

For this purpose, one of the major breakthrough developments in the strategic relationship between India and the US has been the partnership through the Quad with Japan and Australia. The Quad Summit 2022 convened in Tokyo focused on the commitments of the member countries towards a free and open Indo-Pacific. The fourth meeting in a span of one year suggests that these countries are highly committed to improving their strategic multilateral cooperation.

“We have the Quad Summit, we have India’s G20 presidency that we are looking forward to including Prime Minister Narendra Modi, we have 22 Quad ministerial taking place, we will be relaunching the CEO dialogue, we will be launching a critical and emerging technology dialogue early in 2023,” said Finer.

This summit paved the way for greater cooperation in the healthcare sector between India and the US along with the other allies. Together, the Quad partners pledged about $5.2 billion to the Covid-19 Vaccines Advance Market Commitment (COVAX AMC), a financing instrument to support donor-funded access to vaccines in middle to low-income economies. The Quad partnership also allows for greater linkages between the financial infrastructure between the four countries which would be highly beneficial for further strengthening the India-US ties.

India and the US also became a part of another multilateral grouping with the UAE and Israel. The I2U2 Grouping existing between these four countries reiterated the commitments towards a shared effort to enhance cooperation on issues of food security, waste management and energy security.

On more bilateral terms, 2022 also saw the fourth round of the India-US 22 Ministerial Dialogue. The Dialogue, held between the Defence Ministers and the External Affairs Ministers on both sides, primarily focused on the increasing convergence of interests between the two states.

What this means is that both India and the US are likely to mutually benefit from a democratic and rules-based agenda focused on securing the Indo-Pacific, countering the threat to China and also cooperating on new founded strategic issues like critical minerals supply chains and cybersecurity. The positive developments of the India-US relations was also evident during India’s Presidency of the United Nations Security Council wherein the United States extended its support for India’s bid to become a permanent member of the body.

This brings the focus to another significant breakthrough in terms of improving strategic partnerships between India and the US- the NISAR Mission. The joint mission of NASA and ISRO, NISAR stands for NASA-ISRO Synthetic Aperture Radar. This project is likely to have an important impact on understanding the developments in climate change as it allows for an observation of Earth’s complex processes as well as the measurement of the probability of natural disasters such as earthquakes, floods, tsunamis and so on.

In 2020, the integration and installation of the device were completed and India is likely to receive the model by next year. This joint venture shows that the two countries understand the immense potential in space-based technological cooperation for enhancing security.

The USA’s involvement in the International Solar Alliance and its signing of the ISA Framework Agreement form another basis for cooperation in renewable energy technology. Investments in the renewable energy industry is the need of the hour and this forms an important area that the two countries can work together to build a stronger framework as well.

A look at the futureJon Finer, the Deputy National Security Advisor not just commented on the development of India-US relations in 2022 but also said that 2023 will bring newer commitments with itself. It can be expected that the two countries would improve upon their involvement in the various multilateral groupings they are a part of.

Cooperation on critical minerals could also see a boost in the near future. In order to meet the growing demand for critical minerals, especially lithium, the United States is now seeking to develop supply at home by investing in sources for the mineral. India forms a huge market for lithium-ion batteries and this could be the next venture for cooperation between the two countries.

This year posed a vast set of challenges in front of the bilateral relations between the two countries, in terms of the Russian war on Ukraine. However, the countries have repeatedly reiterated the importance of their partnership, which indicates that this relationship’s benefits far outweigh the differences of their various political stances.

There is no doubt that the next year holds a lot of prominence for India as the country takes up the G20 Presidency. However, in terms of the bilateral relations with the United States, much would also depend on the internal political situation of the United States.

As the midterm elections of the US bring a Republican majority in the House of Representatives and a Democrat majority in the Senate, the United States becomes deeply politically polarised. While tense internal politics may become a challenge in bilateral relations, it is still mutually beneficial for both states to maintain closer ties and diversify their strategic and economic cooperation over time. (ANI)