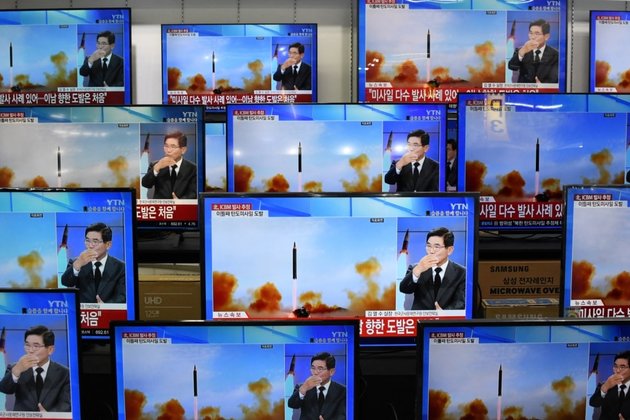 SEOUL, SOUTH KOREA – North Korea continued its unprecedented pace of missile launches Thursday, sending six more missiles into the sea, as it continued to lash out at the United States and South Korea for conducting joint military exercises.

Over the past two days, North Korea has launched 30 missiles, a record high by far, sending military tensions soaring in Northeast Asia.

The North Korean tests prompted South Korea to announce the extension of large-scale air drills with the United States, which had been set to end Friday. About 240 airplanes are conducting around 1,600 sorties in the exercises, U.S. officials said.

In a late-night statement slamming the extension of the drills, a senior North Korean official blamed Washington and Seoul for bringing tensions to an ‘uncontrollable phase.’

‘The U.S. and South Korea will get to know what an irrevocable and awful mistake they made,’ said the statement by Pak Jong Chon, a senior official in North Korea’s ruling Workers’ Party.’

North Korea views such drills as preparation to invade; the United States and South Korea say they are justified and defensive.

With each side blaming the other for raising tensions, it is unclear when the current cycle of provocations will end. 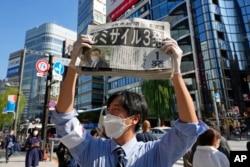 Japanese television broadcasts were also interrupted by emergency alerts, which initially said a North Korean missile flew over and past Japanese territory. Officials later retracted that claim, with Defense Minister Yasukazu Hamada saying officials lost track of the missile while it was flying over the sea between the Korean Peninsula and Japan.

The long-range missile flew about 760 kilometers but failed after its second stage separation, according to military officials quoted in South Korea’s Yonhap news agency.

The United States ‘strongly condemns’ the intercontinental ballistic missile launch and vowed to ‘take all necessary measures’ to ensure the safety of the U.S. homeland, South Korea, and Japan, according to a National Security Council statement.

‘Together, with the international community, we call on the DPRK to refrain from further provocations and engage in sustained and substantive dialogue,’ read a statement from State Department spokesperson Ned Price, using an abbreviation for North Korea’s official name.

North Korea aimed three of Wednesday’s launches toward South Korea, triggering alerts on televisions in the South and air raid sirens on an island off the coast.

In response, South Korea’s military on Wednesday said its warplanes launched three missiles north of the de facto sea border to demonstrate South Korea’s ‘capability and readiness to strike the enemy with precision.’ 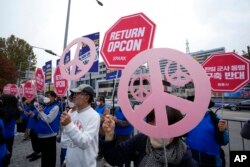 Protesters stage a rally to demand peace on the Korean peninsula in front of the presidential office in Seoul, South Korea, Nov. 3, 2022.

Neither country had sent missiles across the Northern Limit Line since the end of the 1950-53 Korean War; on Wednesday they both did within hours of each other.

North Korea has fired more than 50 ballistic missiles this year – a record – but until Wednesday none had been launched toward South Korean territory or resulted in public air raid alerts.

South Korean and U.S. officials have for months warned that North Korea is in the final stages of preparations for what would be its seventh nuclear test since 2006.

North Korea has many possible motivations for conducting weapons tests, including developing new capabilities, demonstrating deterrence, and signaling resolve to its own people. Many analysts say the latest barrage has a demonstrative component.

North Korea ‘may relish international anxiety in the lead up to its next nuclear detonation, believing that greater global attention will hasten begrudging acceptance of North Korea as a nuclear weapons state,’ Leif-Eric Easley, a professor at Ewha University in Seoul, said by email.

‘In the meantime, its missile tests improve military capabilities and serve political purposes,’ he said.