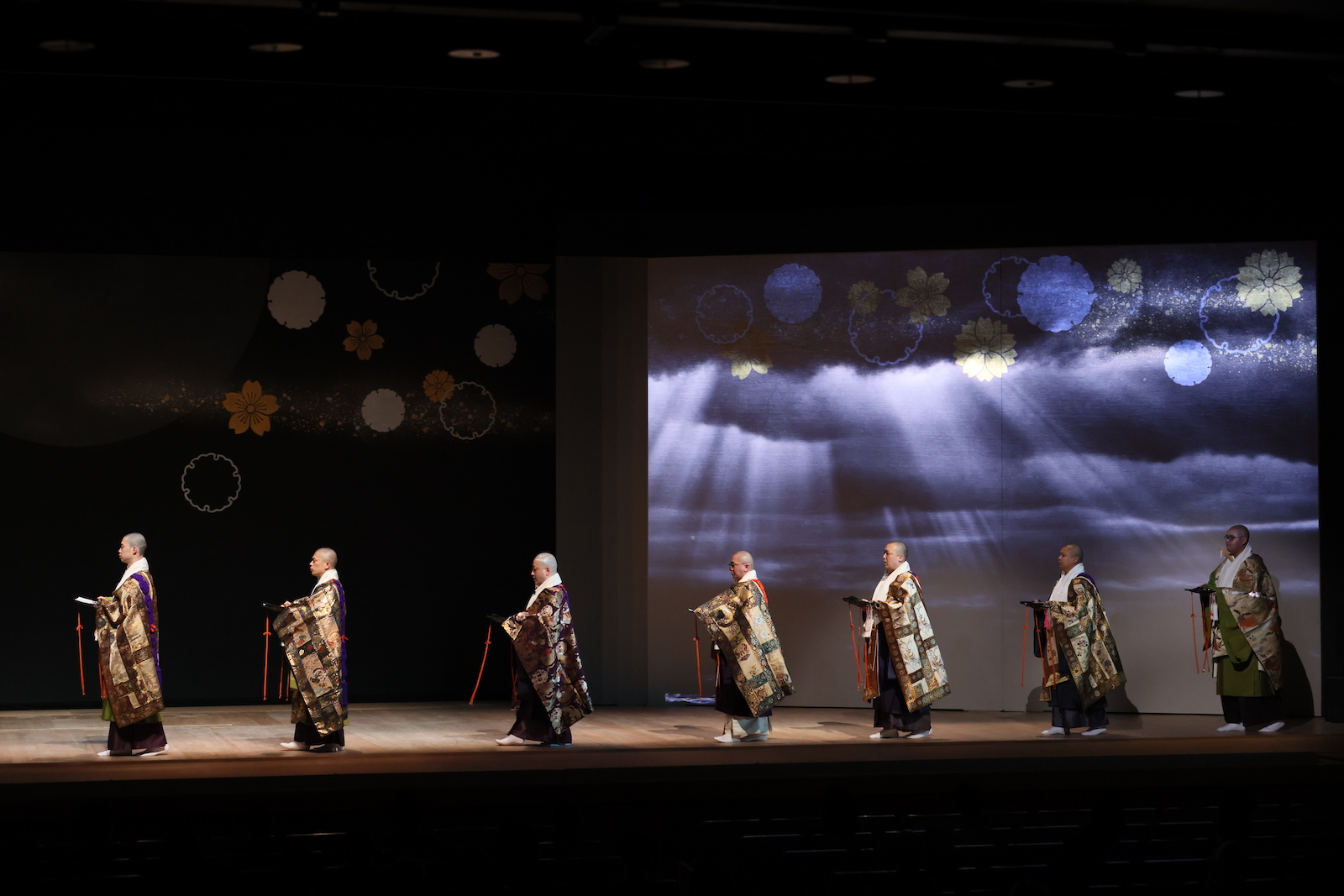 On Feb 28, a stunning showcase of traditional Japanese performing arts took place at the foreigner-friendly National Theatre of Japan in the Hanzomon district of Tokyo. The event was sponsored by the Japan Cultural Expo, a nationwide festival presenting a year-round program of the arts. The Cultural Expo’s goals include making Japan into a stronger arts and culture hub, and leveraging that for economic growth. It is developing and presenting major programs of the Japanese arts, from traditional to the contemporary, such as anime and manga.

The event on the 28th was titled “Moon, Snow and Flowers: Performing Arts Celebrating the Natural Beauty of Japan” and the program incorporated numerous performances that did just that. It used traditional Japanese arts, from stage pieces and ensemble orchestration to singing and solo instrumentation. There were 12 discrete performances in all, four each in the Moon, Snow and Flower categories. The live presentations were augmented by projections on screens on either side of the stage. The images represented traditional Japanese drawing and painting styles while complementing the live production.

The show kicked off with an engrossing rendition of the Kabuki piece “Hagoromo” by the legendary Kabuki actor Kikunosuke Onoe, easily the most recognized performers on the stage that day. Onoe was born into the Otawaya family famous for producing a long line of Kabuki actors. He made his first stage appearance in 1984 and has won numerous awards, including the Yomiuri Theatre Awards’ “Best Performance by an Actor” twice. “Hagoromo” is based on the Japanese performing art Noh and tells the story of a heavenly maiden who comes from the moon and dances wearing the eponymous light and airy celestial robe. Musical accompaniment to the piece was provided by an ensemble of Japanese traditional instruments including shamisen and taiko drums.

After this enchanting beginning, monks of the Tendai Shomyo Shichisekai group took the stage and performed Shomyo, a Buddhist chanting genre that is really an inimitable form that is somewhere between chanting and singing. Their powerful tones entranced the audience and resonated among the acoustics of the National Theatre, adding a spiritual dimension to the proceedings.

In the Snow section of the program there were two solos performances that stood out. Shozan Tanabe played the shakuhachi, a bamboo flute, on the piece “Kogarashi.” The mournful track represents wind blowing through wintry trees. Tamami Tono took the stage with her sho, an instrument that has reeds under a cluster of pipes. It produces harmonious chords by both exhaling and inhaling, a rarity for wind instruments. Her piece “Banshikicho no Choshi” reverberated with the deep emotion. The tones of the sho have a unique and affecting poignancy. 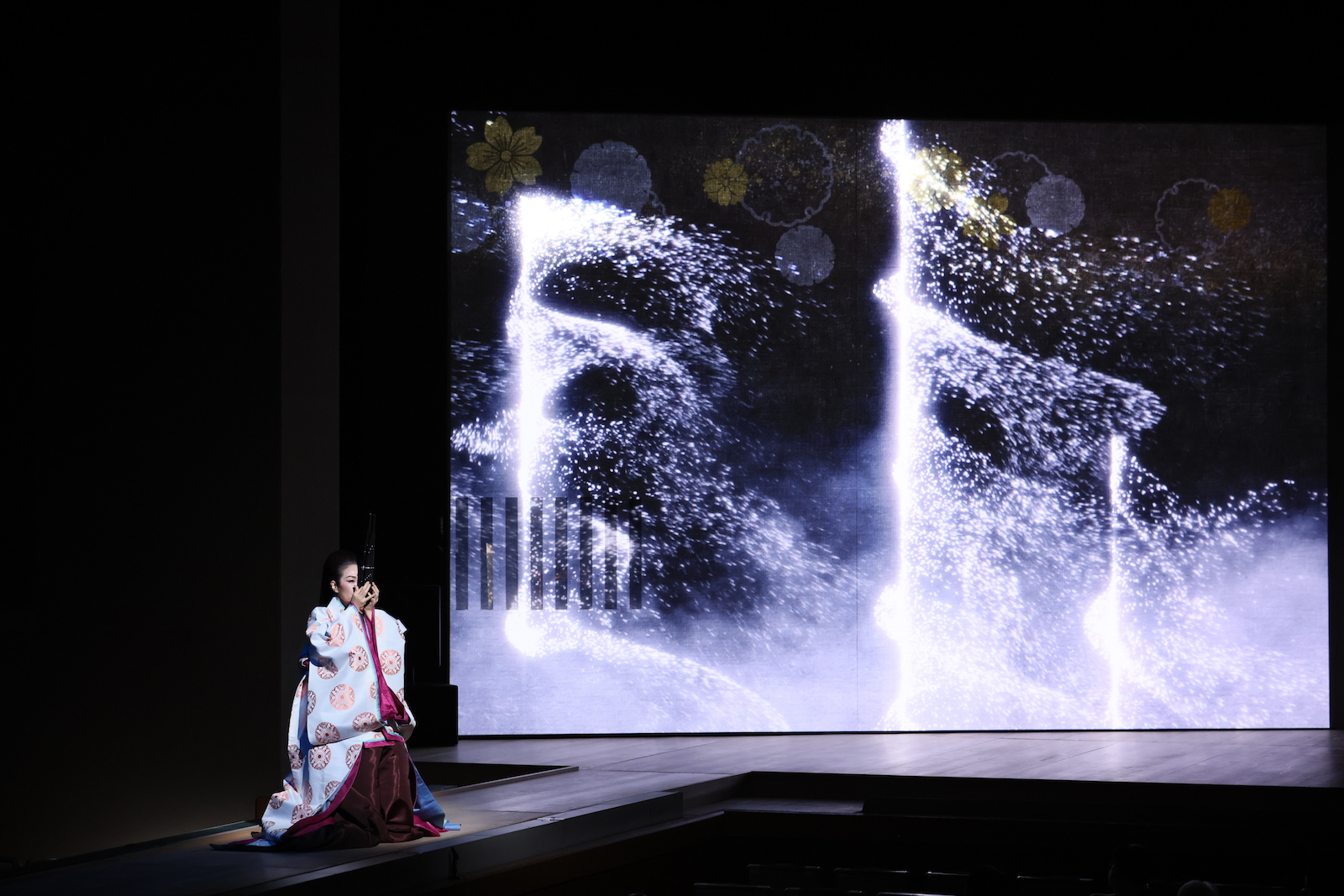 The Flower passages saw two Kabuki pieces as well as a solo biwa performance by Kumiko Shuto, among other work. The biwa is a stringed instrument that came to Japan via the Silk Road and is similar to the pipa in China. Shuto’s powerful and touching voice counterpointed perfectly with the delicate biwa. The composition is based on the “Tale of Genji,” Japan’s oldest written narrative work, and describes a banquet held in spring.

For the grand finale, Onoe returned to the stage for the Kabuki performance “Shakkyo.” This piece is also based on Noh theatre and tells the story of the spirit of the mythical beast shishi, which resembles a lion, appearing on a stone bridge that leads to nirvana. Onoe donned a dramatic, body-length, blond mane that he used to dramatic effect. He also danced with flowers that added to the complexity of the performance.

In all, it was a captivating afternoon of Japanese traditional performance with the Kabuki of Onoe, numerous flute performances, and gagaku, or Japanese court music, shining throughout.

The next event of the Japan Cultural Expo will be three performances of a “Presentation of Prayer” on March 12-14 and the performance will be broadcast online from March 12-30. Tickets are available.