HomeNationalEmergency drill 'assailant' on Japanese train goes viral for being too good...
National 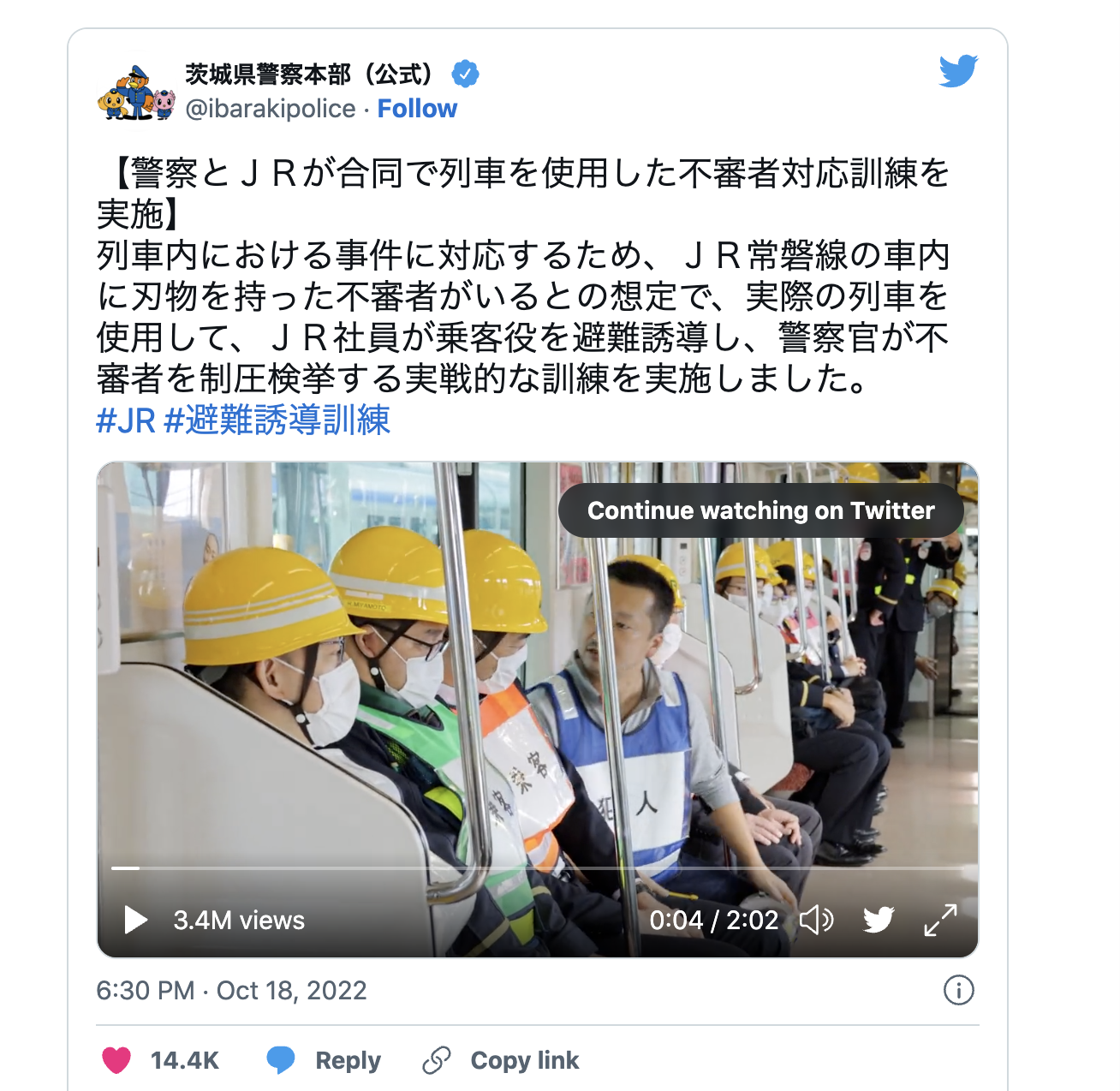 One thing Japan excels at is preparedness training. Whether it’s using mascots to simulate an animal escape from a zoo, or setting up chutes to escape from a burning castle, people are constantly being reminded of the importance of being prepared for worst-case scenarios, and that extends to dangerous situations on Japanese trains.

So when Japan Rail and the Ibaraki Prefectural Police Department conducted an emergency drill inside a train on Japan Rail’s Joban Line, they shared a video of the event with the public. Their desire to spread information about what might occur and how staff and passengers should deal with such an incident went better than planned, as the video ended up going viral online.

The reason why the clip went viral was due to the man playing the role of the knife-wielding assailant. This was no half-baked performance, as the wide-eyed man went all out with the role, playing it so convincingly that the stand-ins playing passengers didn’t need to act scared — they genuinely were.

The video currently has over 3.3 million views.

The video starts with one of the passengers moving away from the assailant, who clearly looks unhinged as he yells while hitting a tiny drum. The scene unfolds further as the passenger, identified by the word “乗客” (jokyaku or passenger) on his vest, heads over to the emergency call button, where he asks the conductor for help and explains that a man with a knife is on the carriage.

Some time passes and the carriage is now being evacuated by staff so that the assailant is on his own, holding a replica of a knife in one hand. This is where the actor really puts on a performance, holding his head in his hands and acting agitated, sprawling out over the seats while shouting at the top of his voice. Then, when the police arrive, we’re all given a lesson in how the authorities confront violence in Japan — not with guns, but with a stick, a shield, and a “man catcher” known as a sasumata.

The assailant makes a lunge for the police officers, but he’s no match for them and their defense system, and the man is restrained and arrested on the spot. Upon the end of the video, online viewers gave the clip a unanimous round of applause, leaving comments like:

“He acts like someone who’s experienced this firsthand before.”

“So impressed by this enactment.”

“Someone nominate him for an Academy Award!”

“Playing the criminal properly like this increases the value of the training. They all did a great job.”

It’s true that the more realistic the scenario, the better prepared everyone will be for an emergency incident like this, so kudos to Japan Rail and the local police for conducting the drill, and to the actor for not holding back with the performance.

— How to escape from a burning castle: evacuation drill reveals thrilling slide system