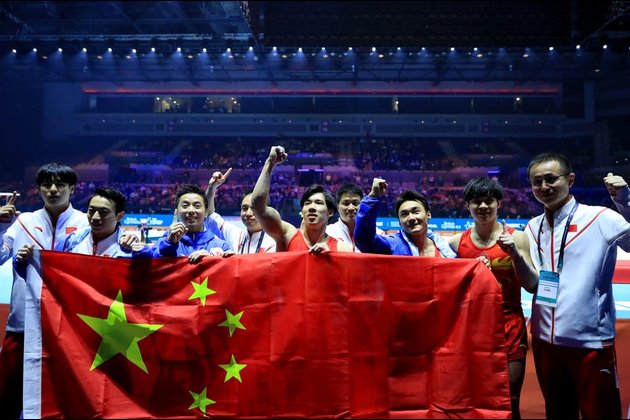 BEIJING, Nov. 5 (Xinhua) — Here are the latest Chinese sports headlines over the past week:

China’s men turned on the style to win the team title at the 51st Artistic Gymnastics World Championships on Wednesday and booked their ticket to the 2024 Paris Olympic Games.

China started the final from the pommel horse and were fifth after the first rotation, more than 2.3 points behind Japan who had put themselves forward with a solid performance in the floor exercise.

China had only finished fourth after a below-par performance in qualification on Monday, but the Tokyo Olympic bronze winners found their form in time to lead the final after competing on three apparatuses and kept their top position until the end with 257.858 points.

World No. 7 Wang Chuqin and his mixed doubles world title-winning partner Sun Yingsha won their respective men’s and women’s finals in style at the WTT Cup Finals here on Sunday.

With the victory, Sun, who turns 22 in five days, defended the year-end title that she won last year in Singapore.

In a statement on Friday afternoon, the South Australian club said they have signed Xiao on loan from Chinese Women’s Super League club Shanghai for the entire 2022-23 season, which begins later this month.

The 26-year-old forward has played more than 30 times for China and is a regular starter as a striker or winger for the national team.

Olympic champion Liu Shiwen of China has announced that she will run to join the International Table Tennis Federation (ITTF)’s Athletes Commission.

Including Liu, 23 candidates were unveiled by the ITTF for the Athletes Commission on October 26. According to regulations, voting will take place from November 7 to 13. The winners will be announced on November 14, with a total of 10 places open for a four-year term on the commission.