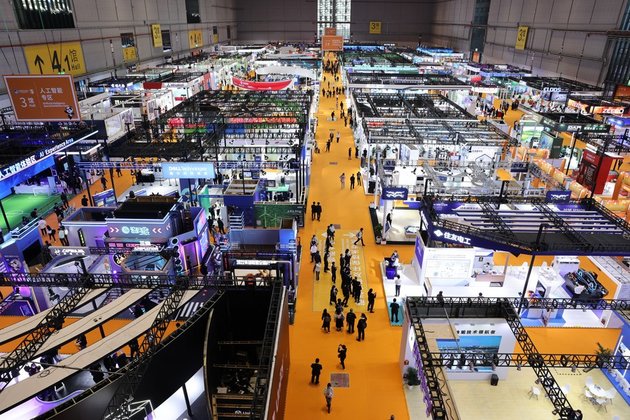 BEIJING, Nov. 5 (Xinhua) — Inside an exhibit booth of about 20 square meters, people stopped at handmade Afghan carpets and rugs, admiring the unique design, softness and natural dyes that had made the crafts among the finest in the world for centuries.

“One large carpet usually takes a family six to nine months to weave and these beautiful and durable carpets show the heritage of craftsmanship passed down through generations of families in Afghanistan,” said Ali Faiz, a 28-year-old merchant who participated in the China International Import Expo (CIIE) for the third time.

Carpets used to be among Afghanistan’s most important trade and export goods. But the industry is declining due to decades of conflicts and Western sanctions. When Faiz brought the carpets to the Chinese market, he also took with him the hope of people in the war-torn country.

Since it was launched in 2018, the CIIE has been carrying the hopes of people, both in China and the other countries, to advance shared prosperity and progress through international trade and business cooperation.

And this global fair has turned Faiz’s dream for a better life into reality.

A MARKET FOR THE WORLD

Through the CIIE, Faiz has received orders for over 2,000 carpets, which he said have brought a year’s worth of income to more than 2,000 Afghan families. Thirty-eight-year-old Boston Barati’s family is one of them.

Growing up in a slum on the outskirts of the Afghan capital Kabul, Barati learned carpet weaving when he was a child and never thought he could own a workshop before his carpets were sold to China.

Walking through a courtyard in Kabul packed with wool threads, several weavers were busy knotting yarn around the warp which made the base of a carpet before they used dyed yarn as a pile to create the carpet’s design. Barati was sitting next to them, drawing carpet patterns with a computer.

“My life was changed after I started exporting the products to China,” Barati said. “I built this house and bought a new car thanks to our successful business in China.”

Faiz and Barati were not the only ones to seize the moment for a changed future. Since the debut of the CIIE, China has been encouraging and assisting companies from the least developed countries to join the expo to seize opportunities presented by China’s development.

At the ongoing exhibition, from Afghan handicrafts to Rwandan coffee, from the cutting-edge medical instruments designed in Silicon Valley to giant mining equipment in Brazil, enterprises across the globe are exploring the opportunities in China, the second largest economy in the world, to grow their international businesses.

The CIIE has become a showcase of China’s new development paradigm, a platform for high-standard opening-up, and a public good for the whole world, Chinese President Xi Jinping said Friday when addressing the opening ceremony of the fifth CIIE via video.

“The most important thing about the Chinese economy is that it’s predictable,” said Khairy Tourk, a professor of economics at the Illinois Institute of Technology in Chicago. “It is enjoying a steady and positive growth, a stable currency, and a financially strong foundation. That’s why China is a very attractive country to invest in.”

A MARKET SHARED BY ALL

Since its first edition, the CIIE has demonstrated China’s commitment to high-level opening-up and widening market access to the rest of the world, contributing to global growth with the country’s high-quality development.

Five years on, China has been forging ahead towards shared growth with all partners having the same vision. Eyeing China’s huge and more open market, comprehensive industrial system, and ever-improving business environment, many foreign-funded businesses are doubling down on their investments in the country.

Conducting business in China for 65 years, ZEISS, the world’s leading enterprise of optical and optoelectronics technology, has a strong and firm mission for the future in China, the company’s largest single market.

Last month it launched a 25-million-U.S.-dollar project in Suzhou city, a manufacturing hub in southeastern China, aiming to provide localized research and development and manufacturing services for all business segments of ZEISS. The company said the new project would empower it to offer better solutions and innovations to its global market.

The Chinese market is “becoming larger and larger every single year, which means that (the market in) China is growing faster than the rest of ZEISS,” Foerst added.

Many transnational corporations share similar views on the prospects of China’s development. According to the Chinese Ministry of Commerce, foreign direct investment in the Chinese mainland, in actual use, expanded 18.9 percent year on year to 155.3 billion dollars in the first three quarters of 2022.

By amplifying the interplay between domestic and international markets and resources, China will work with all countries and parties to share the opportunities in its vast market on its journey toward realizing the Chinese Dream of national rejuvenation.

“We will step up efforts to cultivate a robust domestic market, upgrade trade in goods, develop new mechanisms for trade in services, and import more quality products,” Xi said.

A MARKET ACCESSIBLE TO ALL

For ZEISS, the rapidly growing industry of new energy vehicles in China has become the company’s new source of growth in the future. It has been building up teams to focus on x-ray technologies for new energy vehicles, particularly batteries.

“Why are we doing it in China? Because I’m pretty sure China is the largest single market of new energy vehicles,” Foerst said, adding that “the products we develop here will go into the factories the Chinese companies are building up in Europe, the U.S., and the rest of the world.”

For years, China has been striving to create a more favorable environment and easier access for foreign companies to tap the potential of the Chinese market. As a result, more transnational companies such as Volkswagen have decided to expand their business in China.

This year, a total of 145 nations, regions and international organizations, and enterprises from 127 nations and regions will participate in the week-long CIIE that kicked off on Saturday.

“I think there are no other ones in the world which are able to bring so many industries, so many country representatives and have this dialogue that allows us really to look at opportunities,” Megarbane said.

After 25 years of development, L’Oreal has made China its second biggest market in the world. “We still see a lot of potential and opportunities,” Megarbane added. “That’s the sense of our investment.”

Among the participants at the CIIE, Japanese companies are expecting to increase their exports to China as the Regional Comprehensive Economic Partnership that took effect on Jan. 1 has substantially reduced taxes.

Meanwhile, the world’s largest free trade agreement also encouraged more companies from Singapore, New Zealand and other regional countries to explore the Chinese market. And close connectivity, such as the China-Laos railway, has put trade on a fast track.

In September, the first freight train carrying containers from Kashgar city in China’s Xinjiang arrived in the border town of Hairatan in Afghanistan.

“It is a milestone and a positive step towards boosting trade and economic relations between Afghanistan and the neighboring countries,” said the local governor, Qudratullah Abu Hamza.

“Opening up is going to benefit China a lot, and it is also important in terms of South-South cooperation, where African countries, Latin American countries and Southeast Asian countries can have more access to China,” said Costantinos Bt. Costantinos, a professor of public policy at Addis Ababa University in Ethiopia.

After the operation of the freight train service, Faiz would not have to ship his carpets all the way to Shanghai via Istanbul in the future. Moreover, his dream and the dreams of the people in Afghanistan will be more closely connected with the aspirations of the Chinese people.

As Xi has said, “the Chinese Dream is after all a dream of the people.” It can be fulfilled only when it is linked with the people’s yearning for a better life.