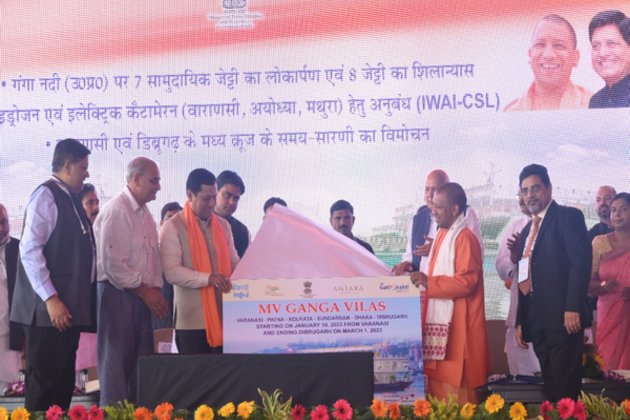 Sarbananda Sonowal, Minister of Ports, Shipping and Waterways inaugurated seven community jetties in the presence of Yogi Adityanath, Chief Minister of Uttar Pradesh and other dignitaries.

Sonowal and Adityanath also laid the foundation stone of eight more jetties on the river Ganga in Uttar Pradesh.

Speaking on the occasion, Sonowal said that under the visionary leadership of Prime Minister Narendra Modi, work is being done for development from Kashmir to Kanyakumari, Ladakh to Arunachal Pradesh under the policy of ‘Ek Bharat, Shreshtha Bharat’.

He said that from waterways to railways, to air transport, to highways, the country is progressing in every field and in the next 25 years, India will be a self-reliant country, as envisioned by Prime Minister.

Sonowal said, “Under the visionary leadership of Prime Minister Narendra Modi, India is implementing policies that would enable the creation of world-class infrastructure. The Prime Minister’s emphasis on developing national waterways that have unleashed strong economic multipliers encompassing logistics, trade, city infrastructure, water supplies and tourism is an exemplification of this vision”.

Union Minister Sonowal further said that the Pradhan Mantri Gati Shakti Summit 2022 will pave the way forward for enhanced and coordinated efforts towards comprehensive development of the waterways-led transportlogistics sector in the country.

He added that active waterways, when used for regular logistics and passenger travel, necessarily create landing and loading/unloading points on the banks of the rivers. This makes large areas of the hinterland accessible to the routes of trade and commerce, making goods from these areas part of the national and global supply chain network, and opening up new markets for everyone–from farmers to craftspeople to factories.

Sonowal said that the focus on “port-led development” is central to this vision to create seamless multi-modal connectivity for the movement of people and cargo, with a focus on removing barriers to last-mile connectivity, emblematic of the Prime Minister’s Atmanirbhar and Ek Bharat, Shreshtha Bharat’ vision”.

On this occasion, Chief Minister of Uttar Pradesh Yogi Adityanath said that not only will Uttar Pradesh benefit from the help of PM Gati Shakti Yojana, but the entire country will develop.

“Many schemes have been implemented under the able leadership of the Prime Minister, which is realizing the dream of Ek Bharat Shreshtha. I thank the Prime Minister that such a beautiful gift that has been given to Varanasi. This will help in easing the traffic from Varanasi to other places in the country. It will also help exports of agricultural and other products from Uttar Pradesh, which is a landlocked state, to efficiently reach sea ports through the inland waterways,” Sl Adityanath said.

The Spiritual City of India is all set to receive the most advanced Hydrogen Fuel Cell Catamaran Vessels, announced Shri Sarbananda Sonowal in the presence of leading dignitaries. The city will get one Hydrogen Fuel Cell Vessel and four Electric Hybrid Vessels for Varanasi.

An MoU was signed between the Inland Waterways Authority of India and Cochin Shipyard Limited during the event.

Under the Jal Marg Vikas Project -II (JMVP-II), also known as Arth Ganga, IWAI is developing/upgrading 62 small community jetties along the river Ganga. These include 15 in Uttar Pradesh, 21 in Bihar, 3 in Jharkhand and 23 in West Bengal.

In UP, jetties are being developed on a 250 km stretch between Varanasi and Ballia. The jetties equipped with all passenger and administrative amenities will enable the movement of freight and passengers across the river resulting in time and cost savings.

The focus on the development of inland waterways will help standardise development and operation, leading to better facilities and improvement in livelihood for local communities. (ANI)