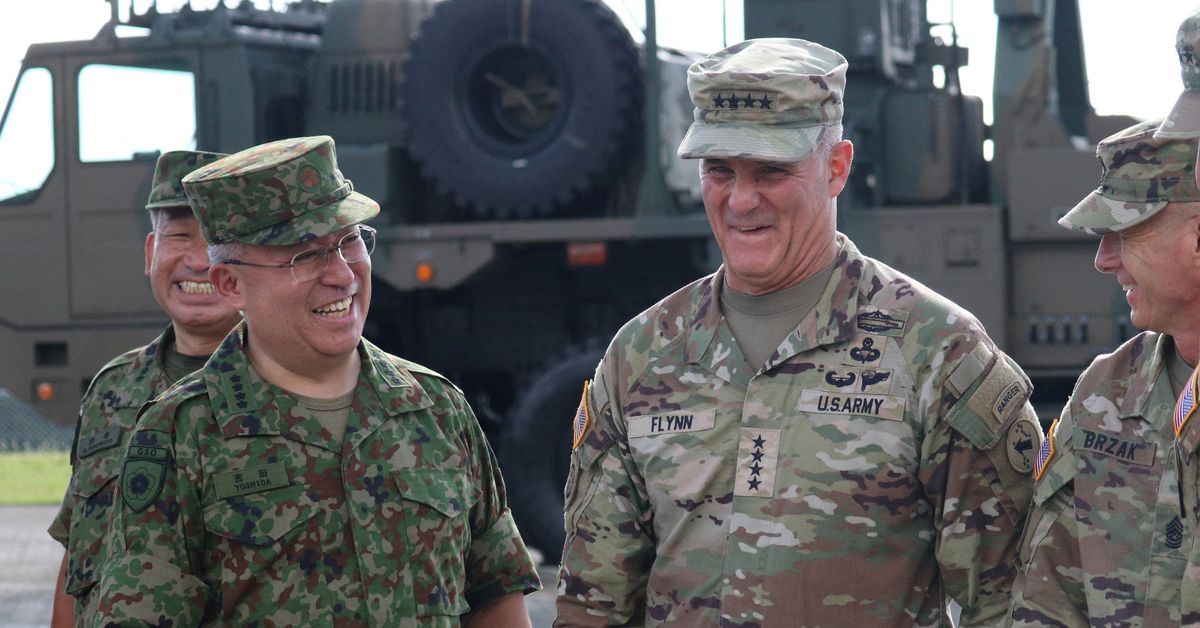 TOKYO, Sept 9 (Reuters) – The U.S. Army’s Pacific commander, General Charles Flynn, said he is in no rush to withdraw rocket launchers and other equipment from a Japanese army base at the edge of the East China Sea even after the joint training they were used in ended.

“Some of the equipment we are just going to leave here” until the next joint drills, he told Reuters on a visit on Thursday to the Japanese Ground Self Defense Force base on Amami Oshima, part of an island chain stretching toward Taiwan.

“It’s an opportunity for us to keep capabilities forward,” he added.

Two more joint training exercises scheduled this year mean that equipment could remain in Amami for several more months. It includes two High Mobility Artillery Rocket Systems (HIMARS) that can fire projectiles up to 500 km (310 miles), and that Washington has also given Ukraine to help it fight Russia.

Using training exercises such as the annual Orient Shield drill that just ended may be an easy and quick way for Washington to redeploy some forces in East Asia, even if only temporarily, as tensions with China over Taiwan grow.

Opened in 2019, Camp Amami is one of a string of new bases Japan is building on its southwest islands for anti-ship and anti-aircraft missile units that it hopes will deter any attack from neighbouring China.

Flynn travelled to Amami with General Yoshihide Yoshida, the Japanese army’s chief of staff, and his visit comes as Tokyo prepares to beef up its military in response to what it sees as a growing threat posed by China and Russia in the wake of Moscow’s attack on Ukraine.

Last month it unveiled a plan to field longer range missiles as part of a substantial defence spending increase that will also provide more money for joint drills with U.S. forces.

“Increasing the scale, the complexity, the size, the duration of the training that our forces must do together is probably a worthy investment from both the U.S. and Japanese forces,” Flynn said at a media roundtable in Tokyo on Friday.

Another urgent priority for Japan, say military experts, is to increase munitions stockpiles.

“What you are seeing in Europe is a protracted fight, so therefore sustainment is an incredibly important wartime function,” Flynn said. “It would be in everyone’s interest to look at their stocks and locations, he added.

(This story corrects to remove extraneous word in para 7)