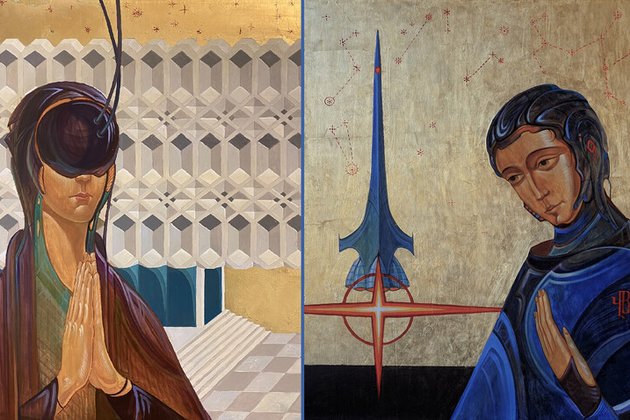 At first glance, Anton Frolov’s paintings remind of the style of ancient Russian iconography. But, instead of saints, he depicts aliens and fantasizes about technology of the future.

Anton Frolov (b. 1982) has been fascinated by science fiction since childhood, especially Stanislav Lem and the Soviet Strugatsky brothers. He found a particular pleasure looking through the incredible sci-fi illustrations by artist Robert Avotin that were published in Soviet publications and magazines. “Fragile, mysterious, illusory worlds, stars floating in a mystic haze,” all captured Anton’s imagination.

Now he has become an artist himself. The style of his paintings is reminiscent of Old Russian icons. He works with wood, tempera and gold leaf gilding. However, his “icons” don’t depict saints or biblical scenes, but rather super civilizations, mysterious alien beings, artificial intelligence and the most unusual messages from other universes.

While experimenting with fine art styles in 2012, Anton made sketches in which he combined the plasticity of Japanese manga and the laconicism of ancient Russian iconography. Unexpectedly to himself, the artist found futuristic features in his works.

“They were sort of sketches of alien life forms that visited our world in the distant past and gave rise to intelligent life,” Anton says.

He called his own style ‘iconic futurism’, and it’s a synthesis of spirituality and high technology. Below are just a few of Anton Frolov’s works. 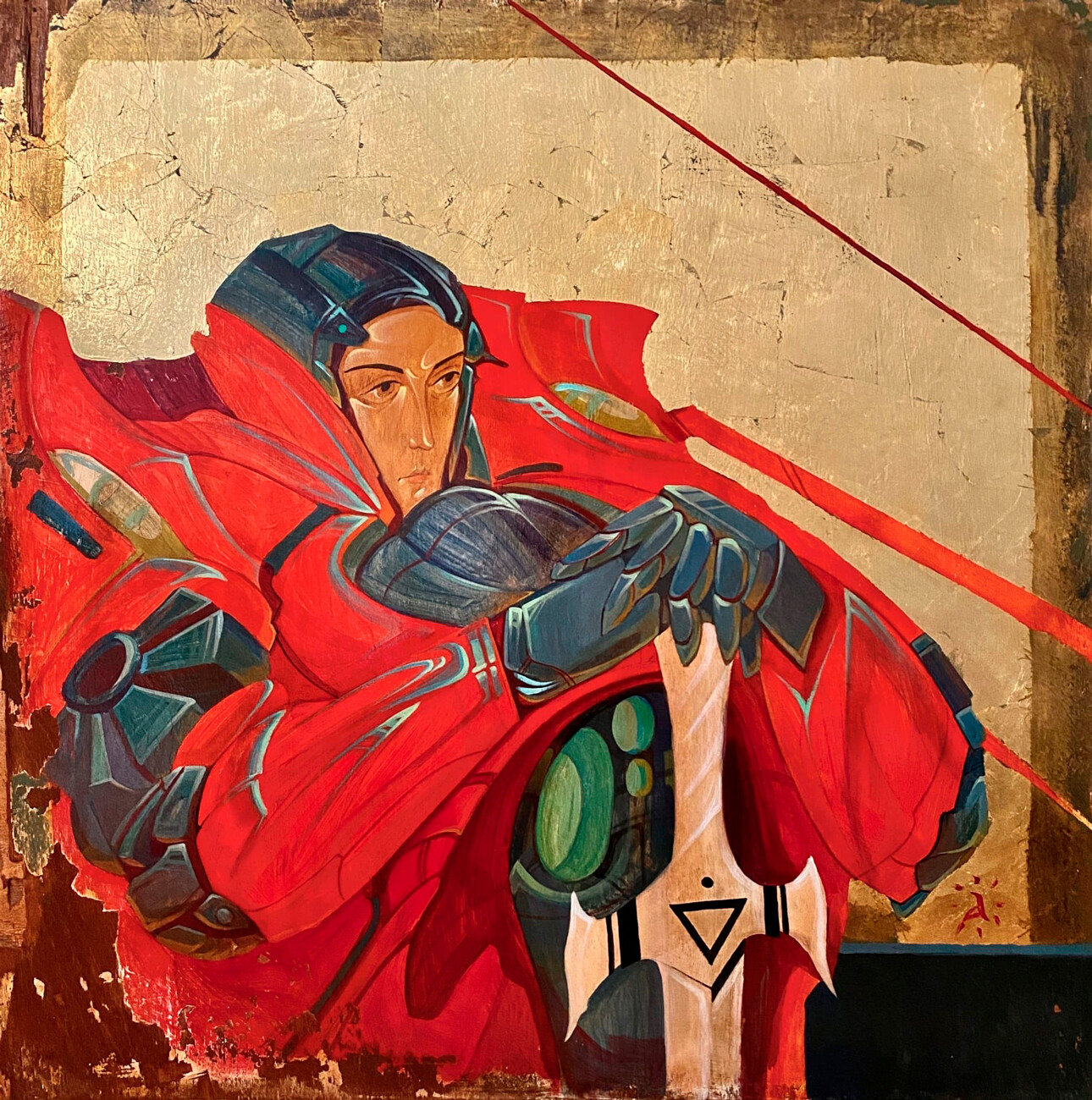 Anton admits that he couldn’t finish this painting for a long time, until he found one missing detail – that thin red line. It symbolizes the line of “no return”, beyond which there is only destruction. And the guardian keeps blocking the way to it. 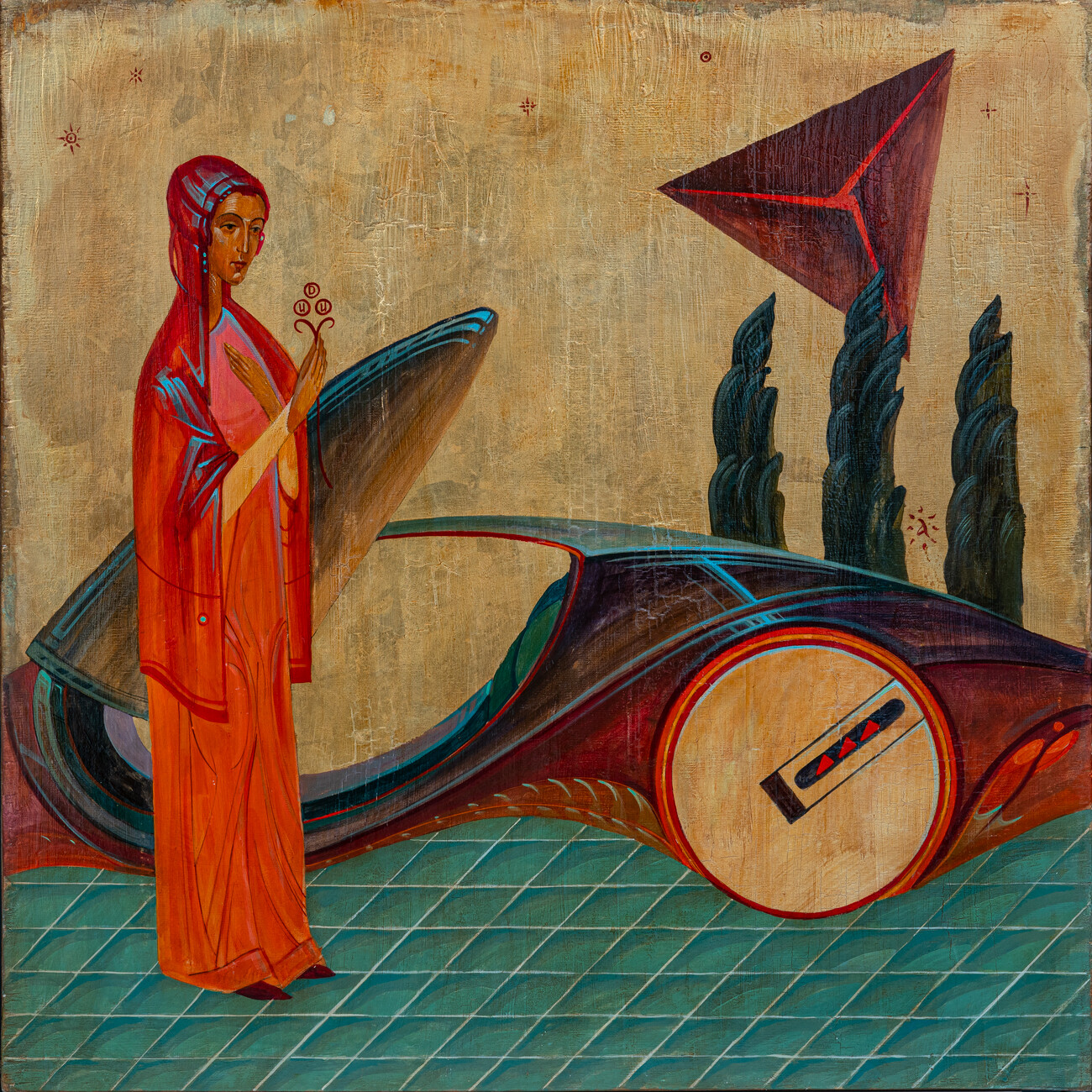 This painting refers to the fairy tale ‘The Scarlet Flower’, a Russian version of ‘Beauty and the Beast’. Except that the flower is stylized as a proton scheme and it’s the “omnipresent” tetrahedron that is looking at the world from behind the crowns of poplars instead of the sun.

When first conceived, the iconographic faces were to be depicted against the backdrop of the planets and the cosmos. But, in the process, Anton moved from the macrocosm to the microcosm, symbolically depicting “different atoms” (The title refers to the novel ‘The Fog’ by Stephen King). 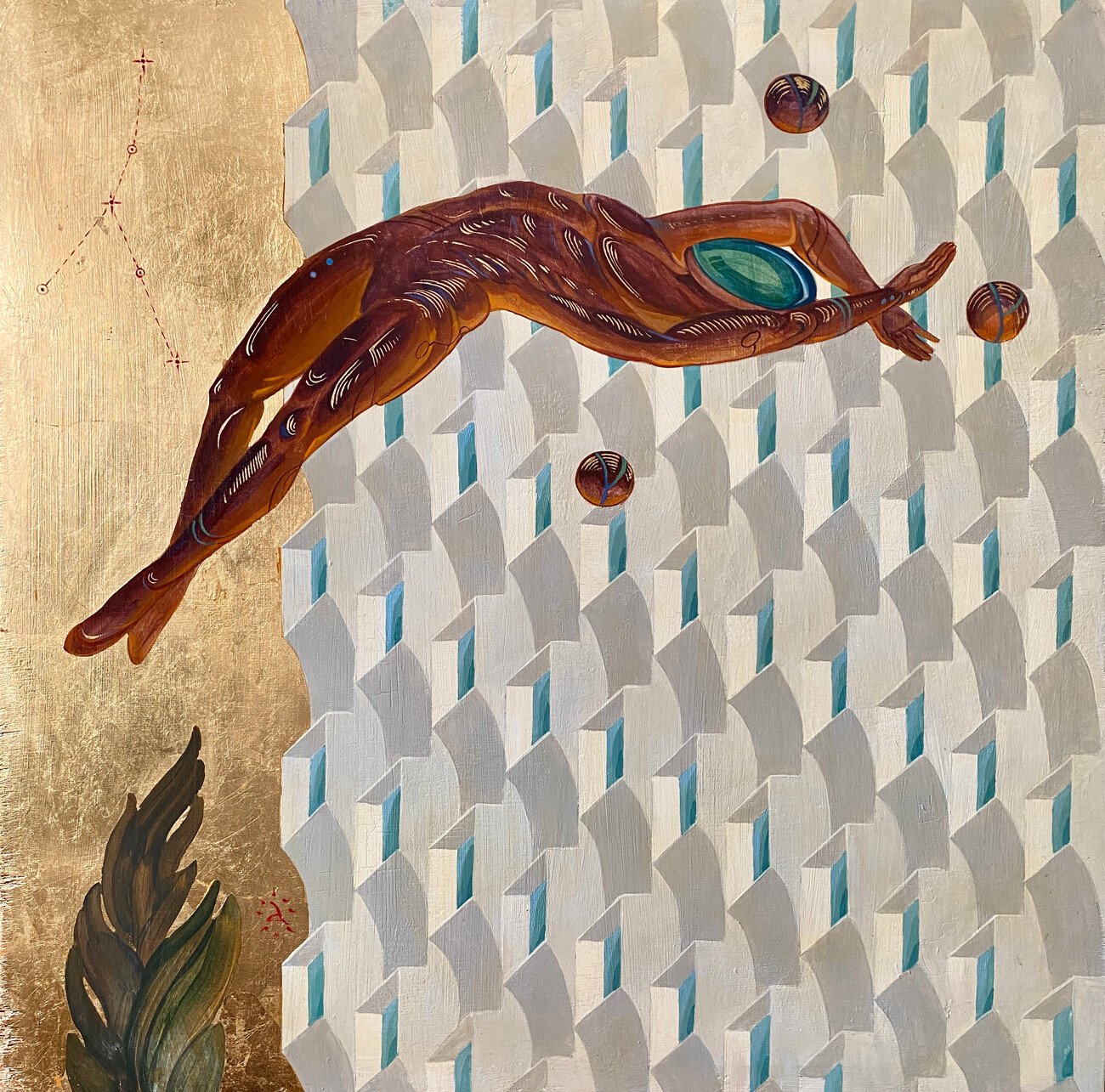 In this painting, Anton uses the assisto iconographic technique, which is shading in gold. It was used by iconographers and painters of the Palekh school in their miniatures. “With a thin brush, glue is applied and gold is laid on top. As a result, the gold plays at different angles, emphasizing the volume of the figure.” 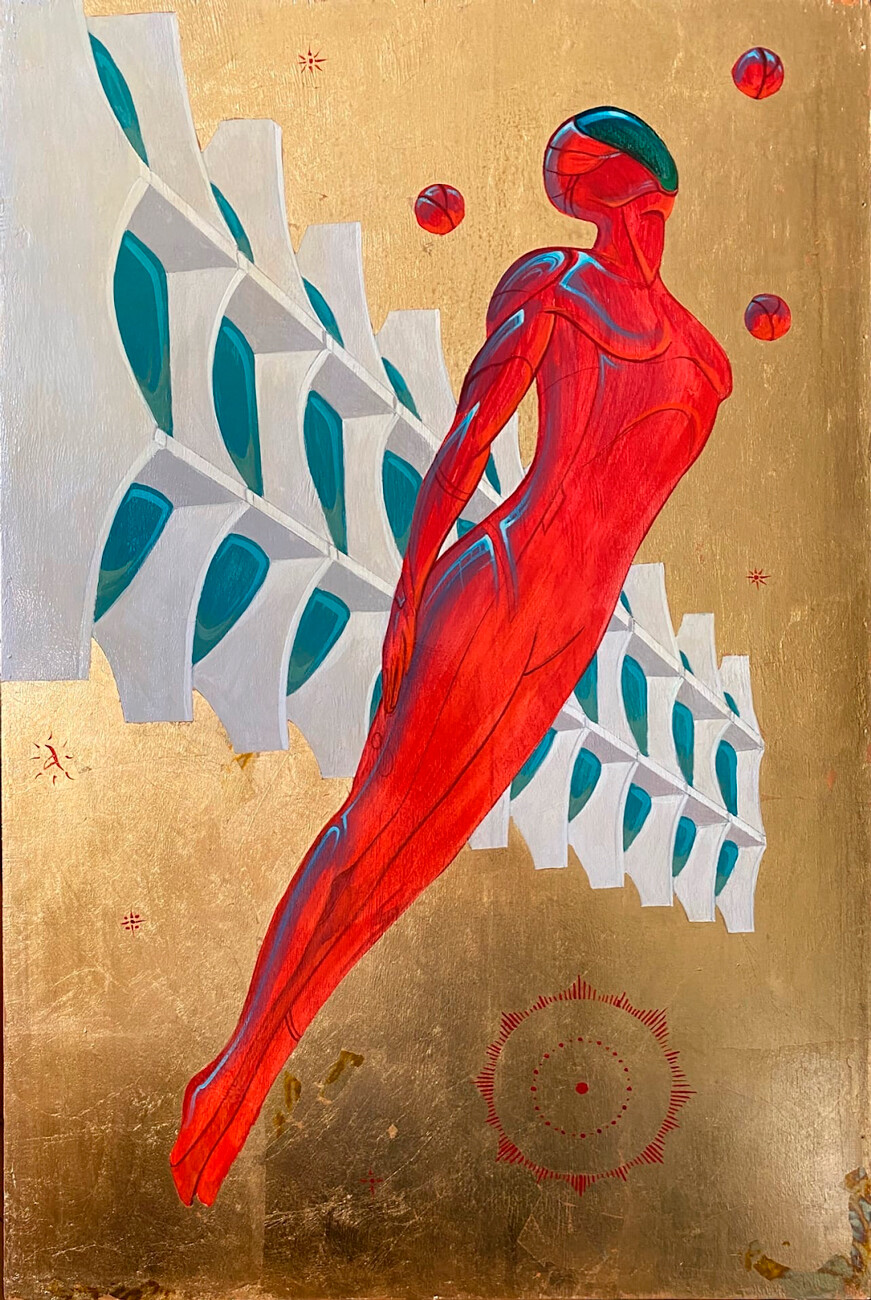 Not for the first time, the backdrop for Anton’s iconic landscapes is architecture in the spirit of 1970s socialism. “An image of freedom and energy against a backdrop of whimsical architecture, soaring in golden infinity.”

‘Photon’ is the light of knowledge. These cosmic faces are a reference to the Noon Universe from the novels of the Strugatsky brothers. The Yormala research group made a dive into a black hole in the Darkness starship, but never came back. Anton offers fantasy portraits of the participants in this experiment. 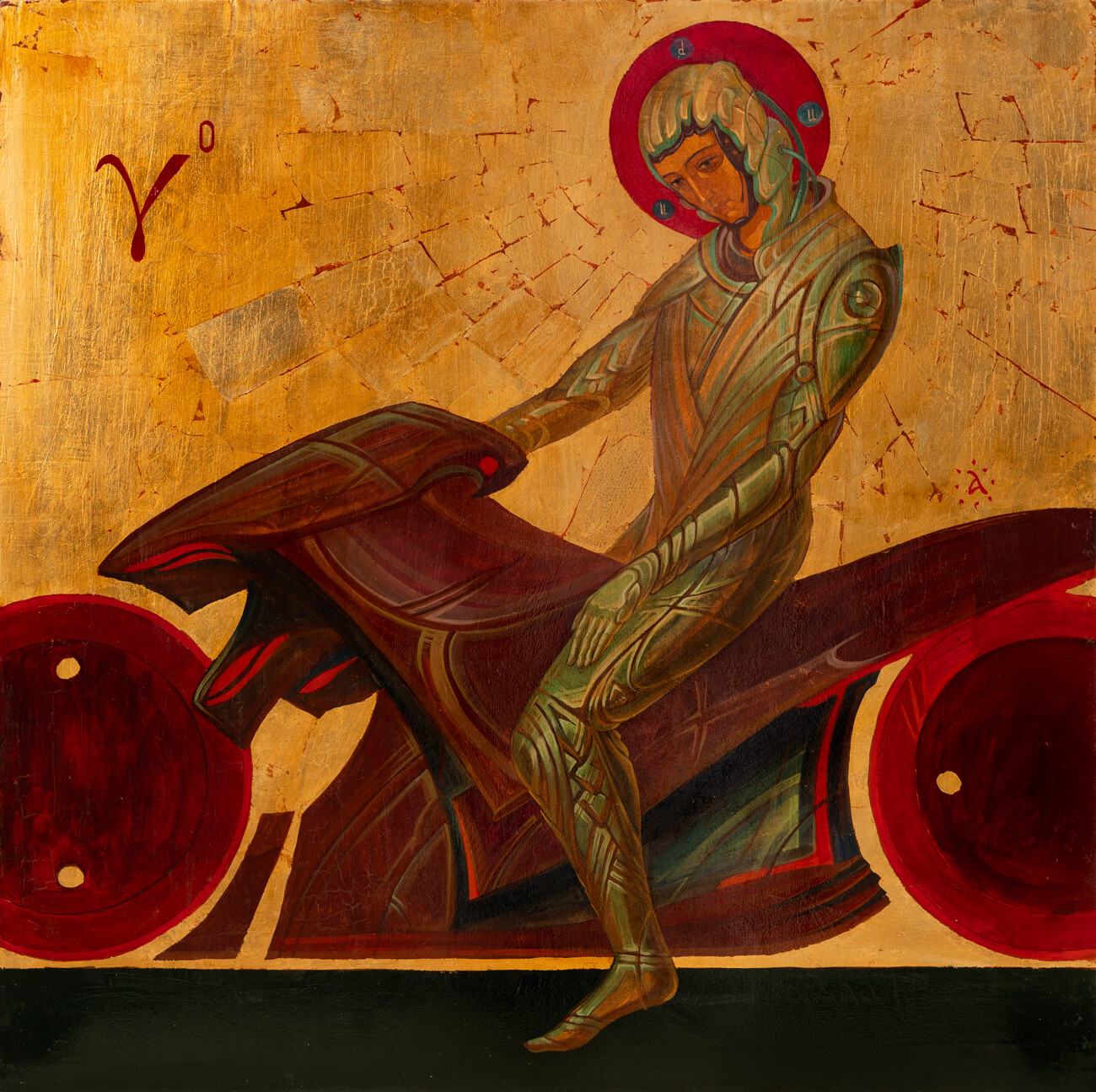 This picture is an allusion to the four horsemen of the Apocalypse and a reflection on man’s attempts to control our world. “Won’t progress accelerate humanity to the point where control is lost?” the artist wonders. 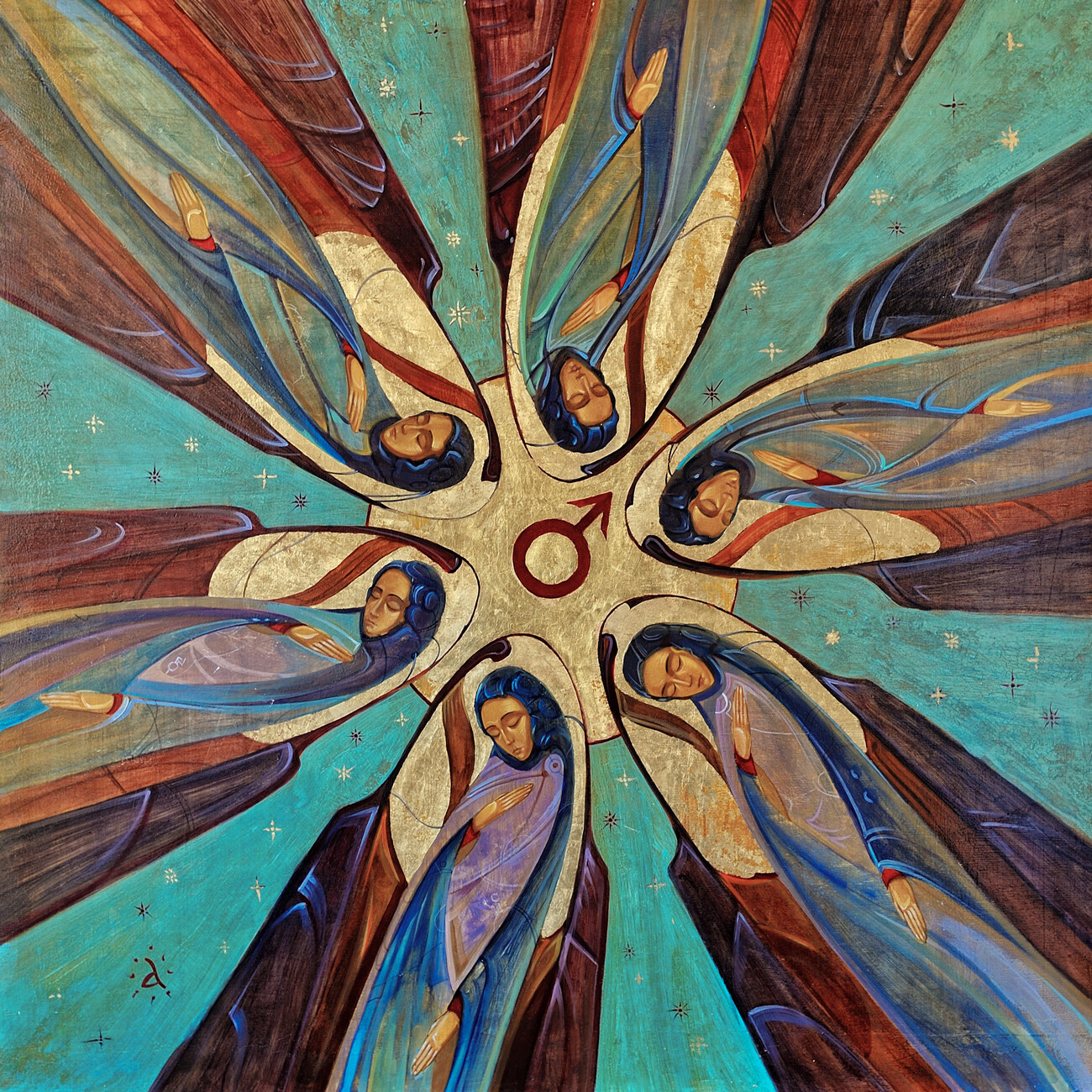 This painting is a fantasy about the colonization of Mars and the “gravity of masculine and feminine beginnings”, inspired by a scene from the movie ‘Alien’ (1979) by Ridley Scott. 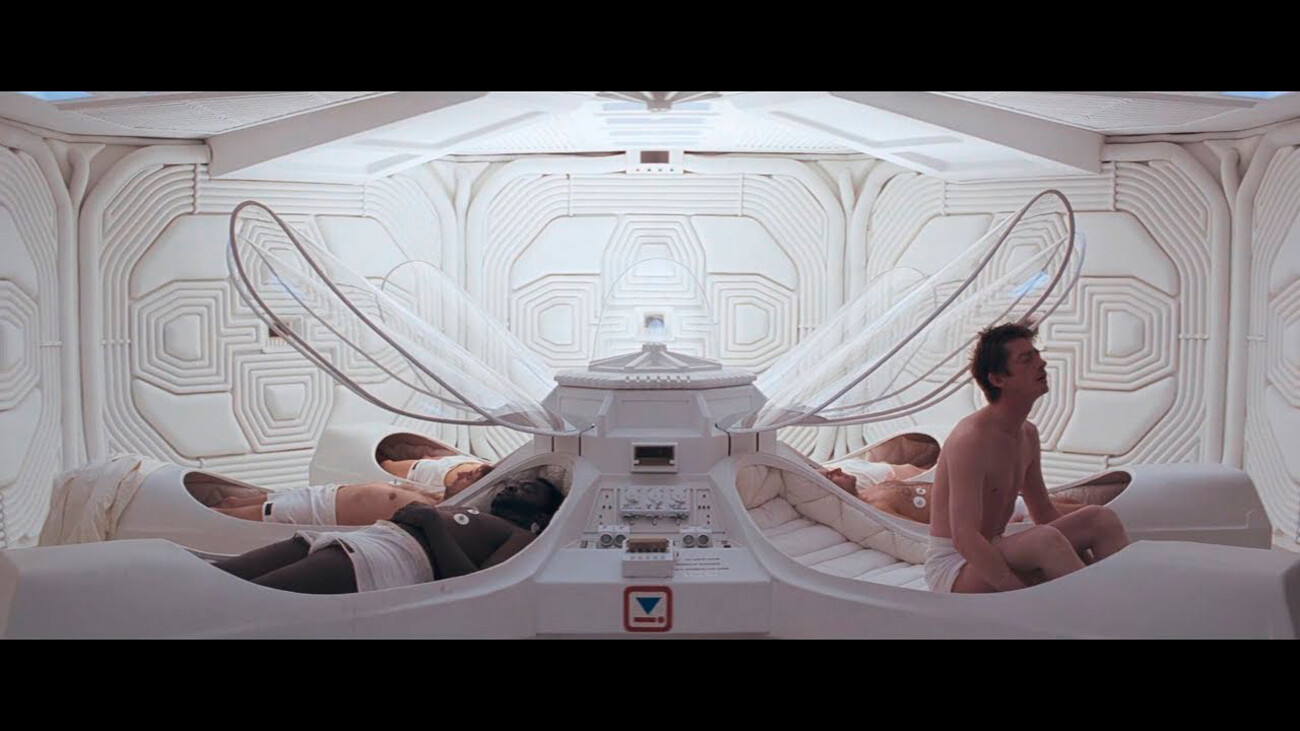 A still from ‘Alien’ 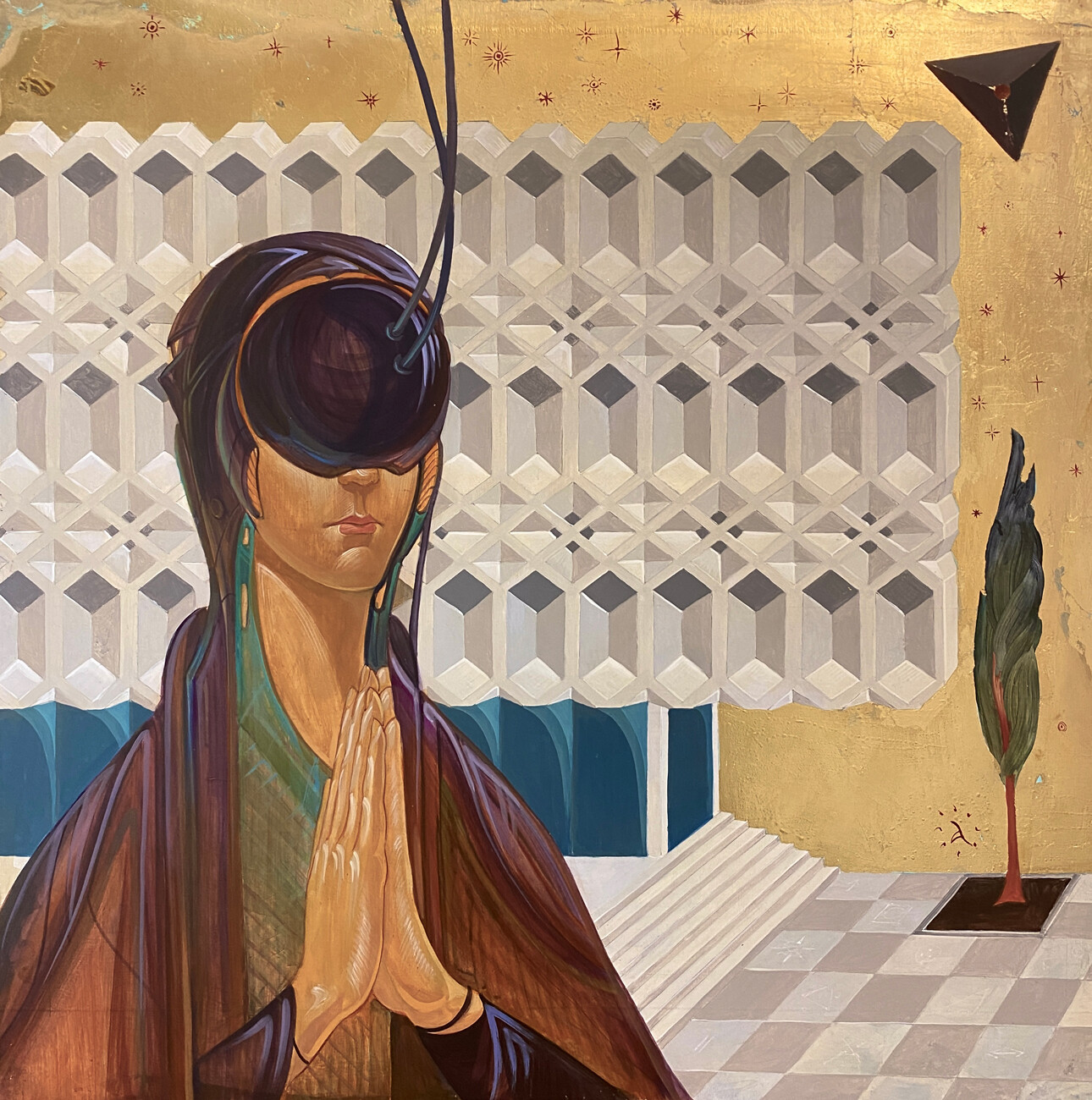 Ephemeral Byzantine images in front of brutalist architecture tell of the isolation and loneliness of the digital world.

Mystery of the constellations, 2021 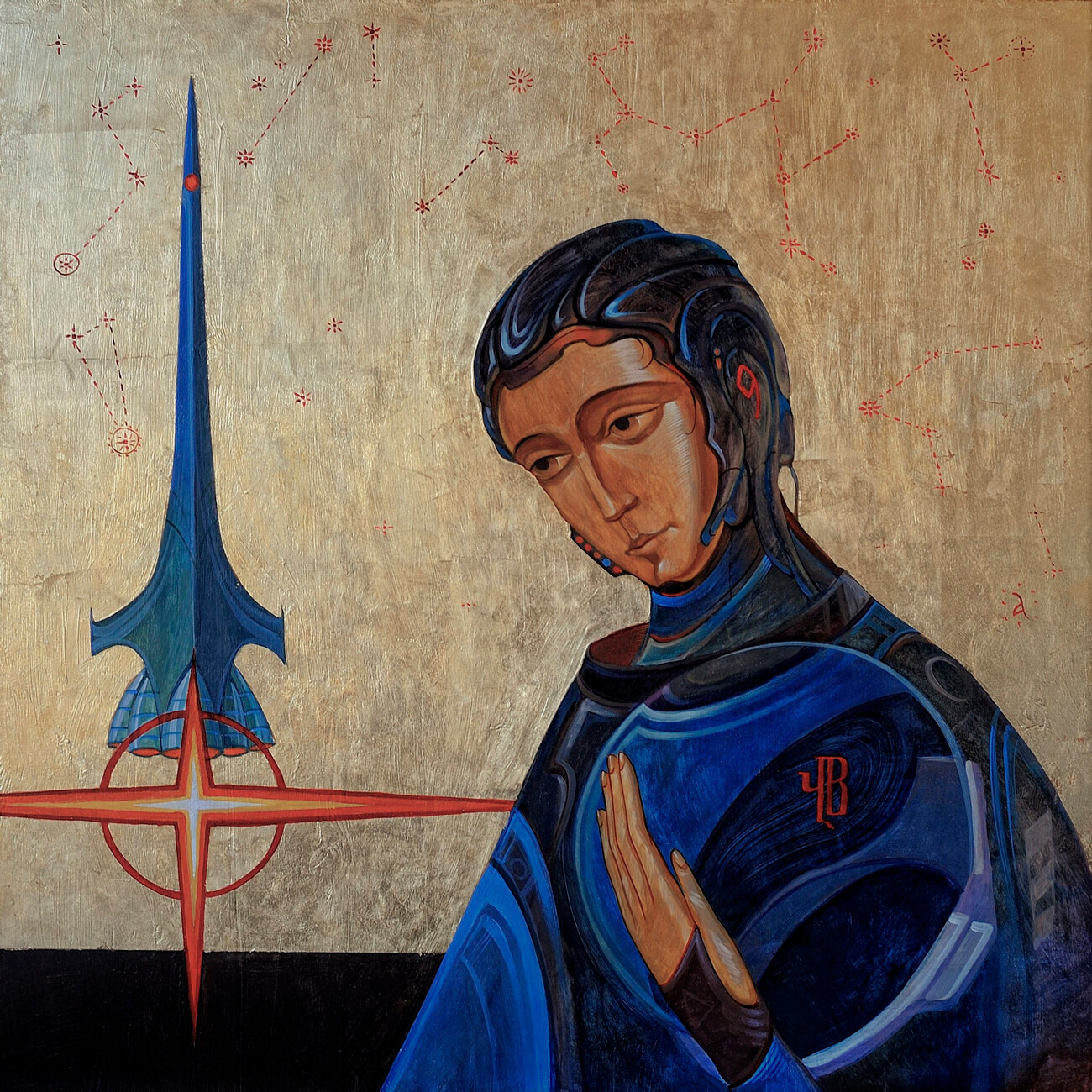 Reflecting on religion and science, Anton fantasizes about some third phenomenon that might arise from their fusion. 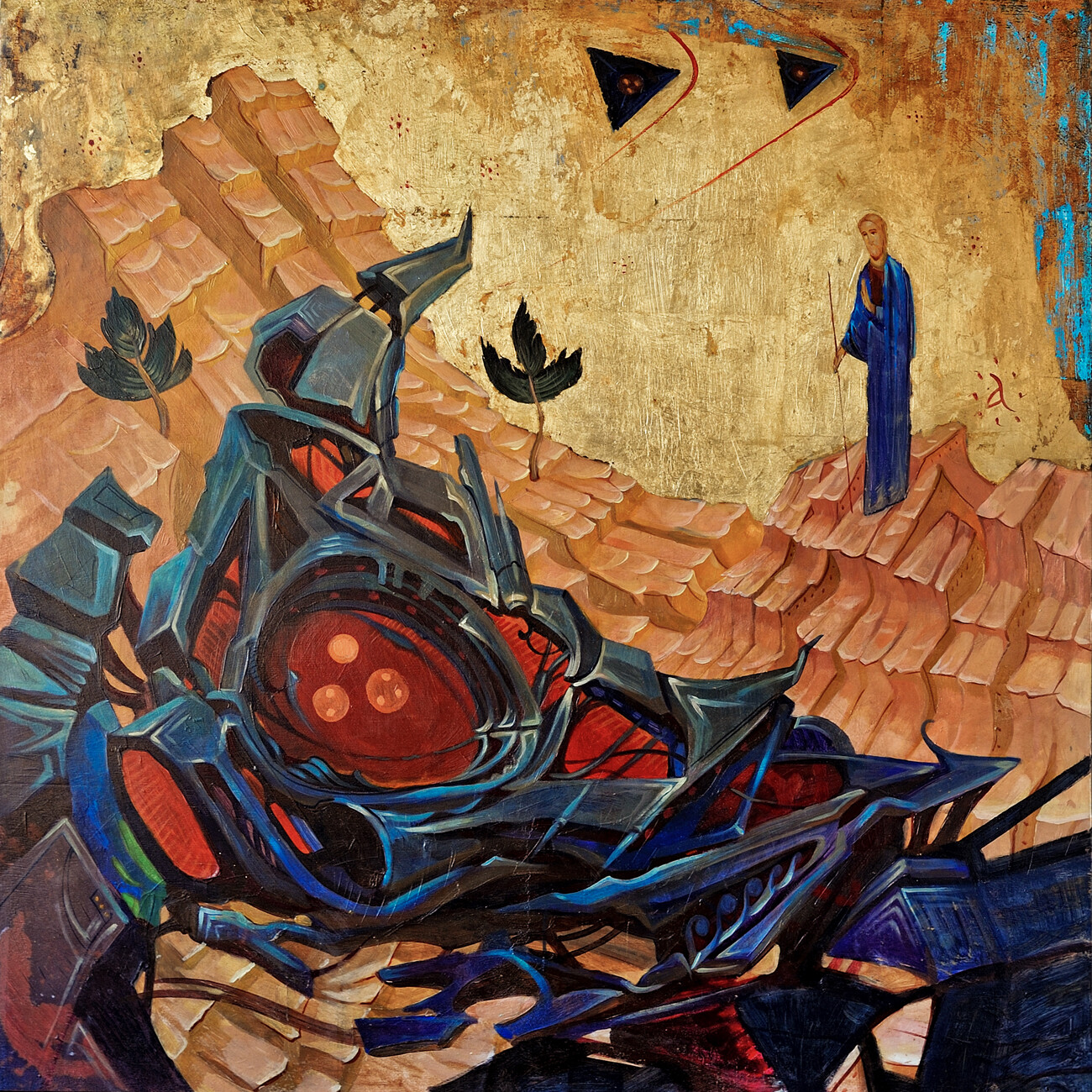 Science fiction often refers to the contact between humanoid and non-humanoid minds. And in this highly complex composition, Anton reflects on the spiritual contact between these two worlds. 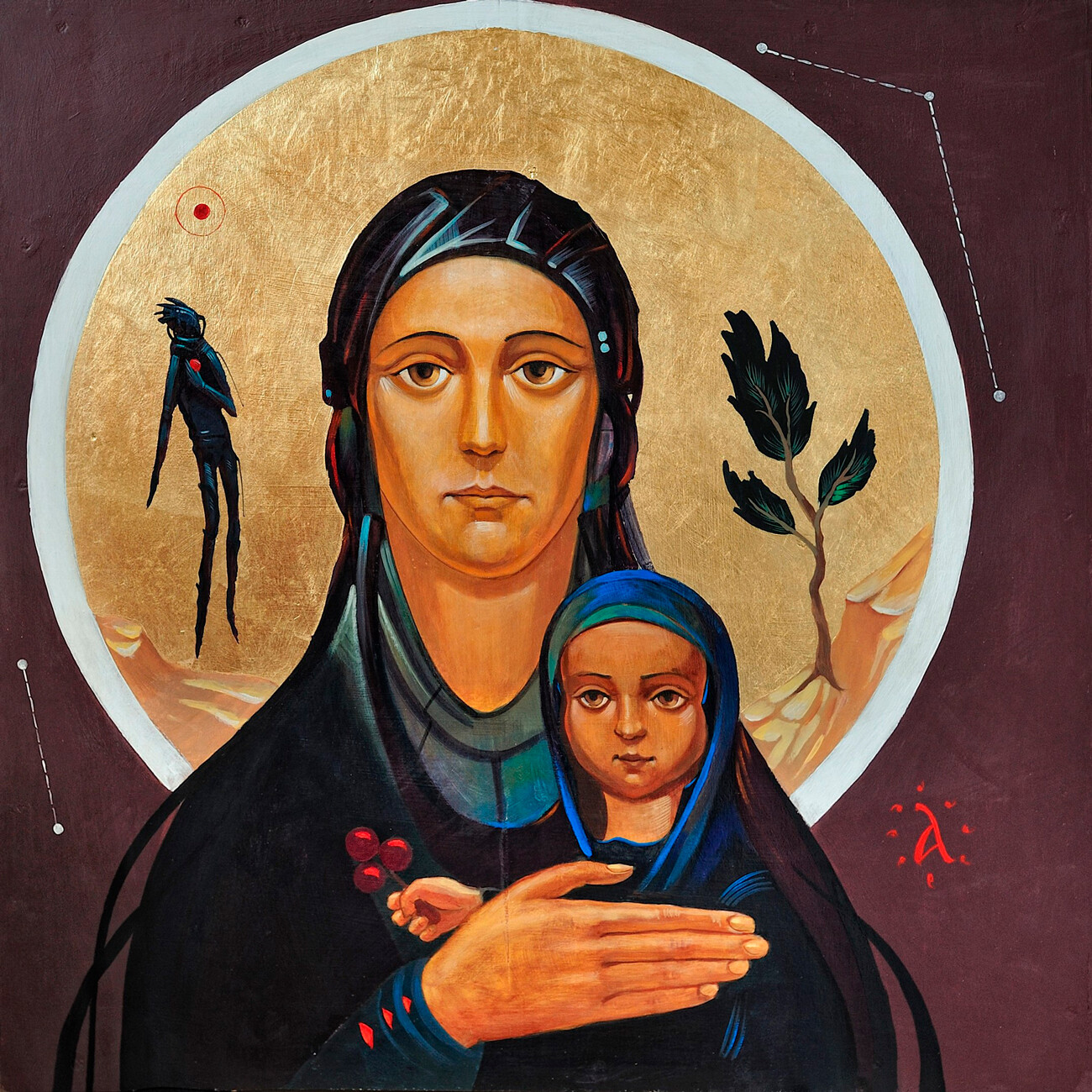 And finally, a sci-fi version of Our Lady.

Our website and social media accounts are under threat of being restricted or banned, due to the current circumstances. So, to keep up with our latest content, simply do the following: