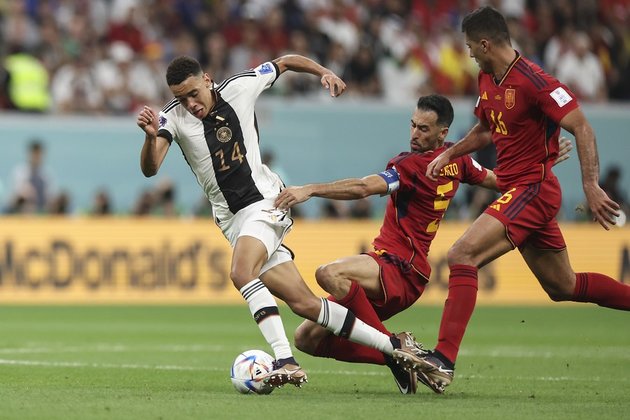 Substitutes Alvaro Morata and Niclas Fullkrug were on target as Spain and Germany drew 1-1 at the 2022 FIFA World Cup.

Morata prodded home Jordi Alba’s low cross in the 62nd minute to put Spain ahead, but the powerful Fullkrug drilled home a vital equalizer in the 83rd minute, just minutes after coming into the game.

The first clash of heavyweights in this World Cup failed to see either land a knockout blow, although after Morata’s goal, the Germans were looking groggy on the ropes.

Spain coach Luis Enrique made just one change to the side that won 7-0 against Costa Rica, with Dani Carvajal in for Cesar Azpilicueta. Leroy Sane was on the subs’ bench for Germany, with coach Hansi Flick not risking him after injury.

The Spain boss promised before the game not to change Spain’s attacking football and was true to his word, as Spain kicked off looking to press high up the pitch.

That pressing forced an error in the sixth minute and Dani Olmo launched a thundering shot towards the top corner, only for goalkeeper Manuel Neuer to tip it onto the woodwork.

Germany responded and Spain’s goalie Unai Simon reacted to deny Serge Gnabry from a narrow angle, although the offside flag was raised afterwards.

Things slowed down after that as both sides began pressing and probing for a way through. Gnabry fired wide after a poor clearance from Simon, while Ferran Torres had an effort well blocked by Antonio Rudiger.

The big defender thought he had put Germany ahead in the 40th minute, planting a free header past Simon from a free-kick, only for VAR to rule his effort out for a narrow offside.

Enrique didn’t waste long in the second half before Morata was benched on for Torres, and after Simon atoned for a poor clearance with a great save from Joshua Kimmich, Morata showed his worth, prodding home a typical poacher’s goal after Olmo and Alba combined for the latter to cross.

Marco Asensio then wasted a good chance to double Spain’s lead on the break, blazing over with his left foot when he had time to control, and that was his last action before being replaced by Koke.

Fullkrug and Sane were soon on for Germany to give more punch in attack, and Fullkrug was close to decisive touch after good work from Jamal Musiala, who was then denied by the Spain keeper after finding space in the area.

There was no denying Fullkrug, when he smashed home moments later to allow his side to take a point and maybe their World Cup.

Sane almost won it in the last moments of injury time when he was clean through on goal, but Simon did a great job of forcing him wide and the defense was able to scramble clear.

The draw means Spain top Group E with four points after two games, and a draw in their last match against Japan will see them through, while Germany need to beat Costa Rica and hope that Japan don’t beat Spain, who have a much better goal difference.