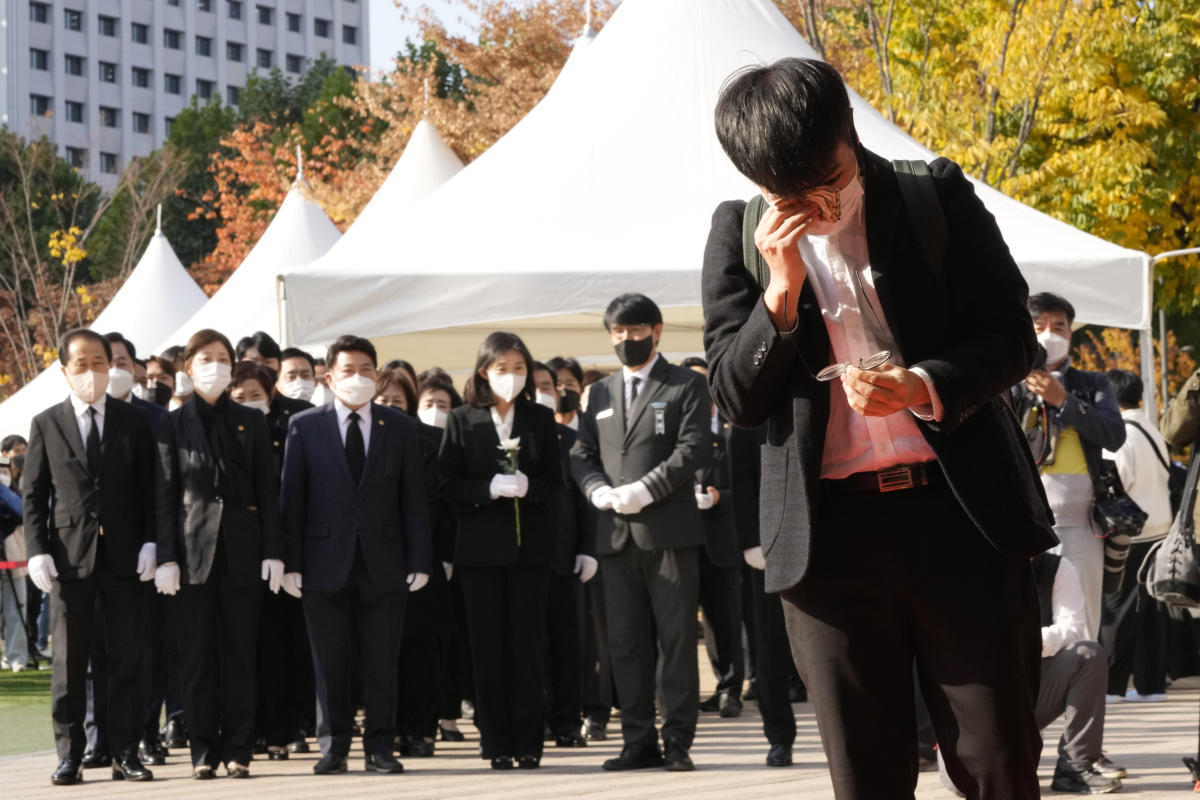 SEOUL, South Korea (AP) — South Korean police investigated on Monday what caused a crowd surge that killed more than 150 people including 26 foreigners during Halloween festivities in Seoul in the country’s worst disaster in years, as President Yoon Suk Yeol and tens of thousands of others paid respects to the dead at special mourning sites.

Saturday’s disaster was concentrated in a sloped, narrow alley in Seoul’s Itaewon neighborhood, a popular nightlife district, with witnesses and survivors recalling a “hell-like” chaos with people falling on each other like dominoes. They said the entire Itaewon area was jammed with slow-moving vehicles and partygoers clad in Halloween costumes, making it impossible for rescuers and ambulances to reach the crammed alleys in time.

Officers have obtained videos taken by about 50 security cameras in the area and are also analyzing video clips posted on social media. They have interviewed more than 40 witnesses and survivors so far, senior police officer Nam Gu-Jun told reporters Monday.

Other police officers said they are trying to find exactly when and where the crowd surge started and how it developed. They said a team of police officers and government forensic experts searched the Itaewon area on Monday.

“The government will thoroughly investigate the cause of the incident and do its best to make necessary improvements of systems to prevent a similar accident from recurring,” Prime Minister Han Duck-soo said at the start of a government meeting on the disaster.

The Itaewon area, famous for its cosmopolitan atmosphere, is the country’s hottest spot for Halloween-themed events and parties, which have grown increasingly popular among young South Koreans in recent years. An estimated 100,000 people were gathered there in the country’s largest Halloween celebration since the pandemic began.

One of the Americans killed was Anne Gieske, a University of Kentucky nursing student from northern Kentucky who was doing a study-abroad program in South Korea, the university said in a statement. The other was Steven Blesi, 20, his father, Steve Blesi, wrote on Twitter after earlier seeking information about his son.

Blesi appealed for information after not hearing from his son, asking, “If anyone has any news please share.” After a flood of responses offering help and support, he tweeted, “We just got confirmation our son died,” followed by “Thank you for the outpouring of love. We need time to grieve.”

Australian victim Grace Rached, a Sydney film production assistant, was described by her family as “our life of the party.” Her family said in a statement that “We are missing our gorgeous angel Grace, who lit up the room with her infectious smile.”

The Japanese dead included Mei Tomikawa, who was studying Korean language in Seoul, according to Japanese media. Her father, Ayumu Tomikawa, told Japanese public broadcaster NHK that his daughter “really liked South Korea and was enjoying her life there.”

Halloween festivities in Itaewon have no official organizers. South Korean police said Monday they don’t have any specific procedures for handling incidents such as crowd surges during an event that has no organizers.

Police said they dispatched 137 officers to maintain order during Halloween festivities on Saturday, much more than the 34-90 officers mobilized in 2017, 2018 and 2019 before the pandemic.

Citing those figures, police dismissed as “different from the truth” speculation that a police station in the area was understaffed because it was providing extra security for Yoon, who earlier moved the presidential office to a site near Itaewon. They said police-provided security for presidents has long been handled by two special police units which have nothing to do with the Yongsan police station, whose jurisdiction includes Itaewon.

Some witnesses said the stampede was caused by people in the upper part of the downhill alley pushing others in the lower area. Local media also questioned an apparent lack of safety preparations for the large crowd expected to gather in Itaewon.

Asked about those possibilities, Nam, the police officer, said the investigation would look into all possible causes of the crush.

As of Monday morning, the government said it has identified 153 of the 154 bodies and informed relatives of their identification. Nearly two-thirds of the dead — 98 — were women. It said 149 others remain injured. The death toll could rise further because officials said 33 of the injured were in serious condition.

More than 80% of the dead were in their 20s or 30s and 11 were teenagers, the Interior Ministry said.

Among foreign victims, five were from Iran, four from China, four from Russia, two from the United States, two from Japan, and one each from Australia, Norway, France, Austria, Vietnam, Thailand, Kazakhstan, Uzbekistan and Sri Lanka, according to the ministry.

As the identifications of the dead neared completion, bereaved families were expected to begin funerals for their loved ones. Officials said the government will provide necessary support for funeral procedures.

President Yoon on Sunday declared a one-week national mourning period and ordered flags at government buildings and public offices to fly at half staff.

The government opened special memorial sites on Monday in Seoul and other major cities. Tens of thousands of people including Yoon and other top officials visited the sites, placed white flowers and bowed deeply. Many people also laid chrysanthemums, bottles of Korean “soju” liquor, candles and snacks near an Itaewon subway station and posted a host of condolence messages.

The crowd surge was South Korea’s deadliest disaster since 2014, when 304 people, mostly high school students, died in a ferry sinking.

The sinking exposed lax safety rules and regulatory failures. It was partially blamed on excessive and poorly fastened cargo and a crew ill-trained for emergency situations. Saturday’s deaths will likely draw public scrutiny of what government officials have done to improve public safety standards since the ferry disaster.

Associated Press writers Adam Schreck in Bangkok and Mari Yamaguchi in Tokyo contributed to this report.