HomeLatestFor China, No Easy Way Out of 'Zero-COVID' Policy
Latest

For China, No Easy Way Out of 'Zero-COVID' Policy 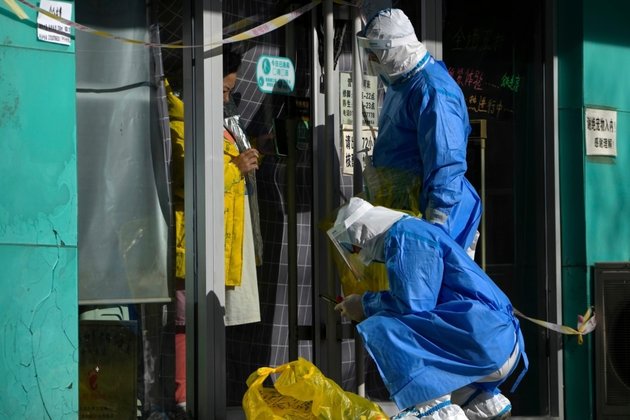 WASHINGTON – As much of the world returned to some kind of new normal in 2022, China remains the only country sticking to a strict “zero-COVID” policy to control the spread of a global pandemic. While credited with saving lives, the policy slowed the economy, exacerbated supply-chain disruptions, cost millions of jobs, forced a large portion of Chinese residents into some form of lockdown for months, and is now, experts say, forcing Beijing’s leadership to seek a way out of a problem they don’t admit having.

Over the last weekend in November, protests against the zero-COVID policy erupted across China, the country where the virus was first identified in humans in late 2019 and where authorities in Wuhan, site of the initial outbreak, locked down millions of residents for most of the first four months of 2020.

That draconian step saved thousands of lives, according to Chinese figures, and since then many Chinese have compared the 6.6 million deaths worldwide to Beijing’s official count of just 15,986 deaths. The U.S. alone has lost more than 1.08 million people. Beijing’s policy emphasized “always putting the people and their lives above everything else,” according to a November 25 analysis in the official Xinhua news outlet.

But three years into zero-COVID, people fed up with being locked down are in the streets chanting “No PCR test, we want freedom!” “End the lockdowns!” “Step down, Communist Party!” Protests of this scale are rare because the Chinese Communist Party limits freedom of speech and association.

Under President Xi Jinping, whose increasingly authoritarian rule was extended for a historic third term in October, many citizens vent on social media, trying to stay ahead of censors.

“China at one point was one of the world leaders in COVID response, and now it’s the only country in the world that hasn’t gotten back to a near normal,” said Lawrence Gostin, a professor of global health law at Washington’s Georgetown University and director of the World Health Organization Collaborating Center on National and Global Health Law.

“I think part of the reason for that is literally the stubbornness of Chinese leadership, and particularly Xi Jinping,” he told VOA Mandarin via phone.

Xi Chen, an associate professor of health policy and economics at the Yale School of Public Health, told VOA Mandarin in a phone interview that public outrage and economic impact indicate that China needs to make “a big adjustment in its public health policy.”

“Look at the U.S., their cases are several times higher than us, yet their people are living their lives to the fullest. It’s time for us to adjust our policy, people should be able to relax and live a normal life, we as medical workers are the ones that should be prepared to face a rise in severe cases,” he said in the video, which China’s censors deleted soon after it appeared.

Georgetown’s Gostin said that through conversations with top epidemiologists in Hong Kong who advise Beijing on its COVID strategy, he believes that Xi understands that China needs to end its zero-COVID policy.

“But China is running out of time,” Gostin added.

Officially, Chinese leadership had shown little interest in ending zero-COVID before the end of last month.

On November 29, during the regular daily press briefing, a Reuters reporter in Beijing asked Chinese Foreign Ministry spokesperson Zhao Lijian, ‘Given the widespread display of anger and frustration at the zero-COVID policy in recent days across China, is China thinking about ending it and if so, when?’

Zhao, usually quick with an answer, looked at the papers on his podium for almost 20 seconds before asking the reporter to repeat his question. Zhao then paused for another 15 seconds before saying that China is following a “dynamic zero-COVID policy” and there is no public anger.

His silence came after Xinhua issued commentaries on November 28, saying that while Beijing will do its best to accommodate the needs or desires of the people, it will stick to a “dynamic zero-COVID policy.”

“From newborn babies to centenarians, we won’t miss one infected case, we won’t give up on one patient,” one commentary said.

A day later, Vice Premier Sun Chunlan, who oversees China’s COVID containment efforts, urged further ‘optimization’ of testing, treatment and quarantine policies, according to Reuters. The agency cited other officials saying that current restrictions, such as forcing people from their homes into quarantine centers if they test positive for the virus, would be implemented more flexibly to reflect local conditions.

Xi has staked his political reputation on the fight against COVID, and that continues to mean mass testing, snap lockdowns and extensive quarantines.

According to estimates by the Japanese investment bank Nomura, about 412 million people in China were in some kind of lockdown as of November 23. That accounts for almost a third of China’s total population and was up from 340 million the week before.

In November, with the number of cases increasing in Beijing, many residents in the country’s capital feared a similar lockdown as residents of other cities blamed the zero-COVID policy for tragedies.

In the western city of Lanzhou, a 3-year-old boy died of carbon monoxide poisoning after COVID restrictions kept him from receiving medical care. His father told Reuters that the strict COVID-19 policies “indirectly killed” his son.

In China’s northern city of Hohhot, a 55-year-old woman committed suicide by jumping from the 12th floor, where she had been quarantined for two weeks. The woman was reported to have suffered from anxiety and was on anti-depression medication, sparking discussion about the impact on mental health from strict zero-COVID lockdowns.

The last straw was a fire in Urumqi on November 24 that killed at least 10 people and injured nine in a building with stringent lockdown protocols that that may have prevented victims from fleeing the flames. In a news briefing after the fire, Li Wensheng, head of the Urumqi City Fire Rescue department, said “the residents lacked the ability to rescue themselves.”

“I think China’s zero-COVID strategy has been disastrous for the country in so many different ways,” said Gostin of Georgetown. “Most importantly it’s really been a huge violation of human rights: not just the lockdowns, but also the intrusive surveillance that we’ve seen of the entire population on their mobile phones.”

To enter any public space, all residents of China rely on a color-coded smart phone app that tracks exposure to infection. In June, media reports surfaced that authorities in Zhengzhou, the capital of central Henan province, were using the codes to restrict the movement of people heading to protest at local banks that had frozen their deposits.

Although the zero-COVID policy had nothing to do with the Zhengzhou bank run, it has slowed the country’s economic growth.

Previous official estimates said China’s economy would grow 5.5% in 2022. Now, the International Monetary Fund has lowered China’s economic growth projection for this year to 3.3%. The difference equals about $400 billion in lost GDP.

“International trade and tourism have ground to a halt. Supply chains have been severely disrupted,’ Gostin said. ‘And all in all, I think it’s actually reduced public trust in Xi Jinping, and it burst the bubble of so-called Chinese efficiency and effectiveness in policy.”

“They went into a prolonged lockdown without any seeming purpose or endgame to it,” Fauci said.

Unlike almost all other countries, a large percentage of China’s population lacks immunity because most people have not been infected with COVID. Without this so-called herd immunity, it may be difficult for China to extricate itself from its zero-COVID position.

The elderly are among the most vulnerable, but according to new statistics released by the Chinese Center for Disease Control and Prevention on November 29, only 65.8% of people over the age of 80 have received booster shots, up from 40% as of November 11.

‘There is no shortage of hospital beds in China. The number of hospital beds per 100,000 people is basically the same as that of the United States. But for intensive care unit beds, it’s a completely different story,” he said.

According to government statistics, there are 3.6 intensive care (ICU) beds per 100,000 people in China, compared to 11 in Singapore and 29.4 in the United States.

“This is China’s weakest point,” Chen said. “Once the country relaxes the zero-COVID strategy, there will inevitably be a proportion of severe cases. And there will be deaths considering the current ICU beds level.”

He added that as the country pours all its medical resources to COVID testing, there are few resources available for making these long-term preparations.

Shin-Ru Shih, director of the Research Center for Emerging Viral Infections at Taiwan’s Chang Gung University in Taiwan, said that even though the omicron variant has become less virulent, it is still a threat to Chinese people who have not been infected or vaccinated.

“The best way for China to fight against COVID and to reduce economic impact is vaccination by next-generation vaccines,” she said.

Gostin stressed that it’s particularly important to make sure that a large percentage of the vulnerable populations gets jabbed with effective vaccines and boosters, saying “that is the only way China can emerge from zero-COVID … without a considerable loss of life.”