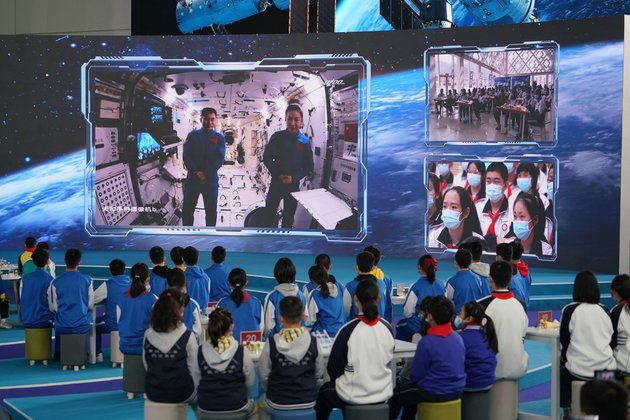 The first batch of Chinese astronauts were all recruited from elite pilots of China’s air force. Among them were Yang Liwei, China’s first space traveler sent into space in 2003, and Zhai Zhigang, the country’s first spacewalker. They were both awarded the title of “Space Hero.”

Since then, Chinese astronauts have remained in the spotlight. They receive interviews or give speeches to students. Yang’s autobiographic article “One Day in Space” is even included in the Chinese textbook for middle school students across the country.

In a survey conducted by the China Youth Daily in July 2021, after China launched the Shenzhou-12 spaceship to send three Chinese astronauts to the space station core module, 98.3 percent of the 2,047 participants aged between 14 and 35 said they paid attention to the aerospace industry. The survey also showed that 65.9 percent had a strong interest in the aerospace industry.

With the progress of the program, science popularization activities in orbit have become another focus of public attention.

In 2013, female astronaut Wang Yaping delivered a televised science lecture to an audience of over 60 million schoolchildren during the Shenzhou-10 mission. She earned the title of China’s first space teacher.

During the lectures, the trio showed the students their living and working areas in the Tianhe core module. They also demonstrated several experiments under zero-gravity conditions, such as the crystallization of supersaturated solutions, a liquid bridge demonstration, water-oil separation, and throwing objects in zero-gravity conditions. It amazed numerous students on Earth.

The ample room in the space station and the large bandwidth transmission between space and Earth have made it possible for the public to closely follow the lives and work of Chinese astronauts for the first time.

As of September 2022, the China Manned Space Agency has issued about 110 video clips through its social media accounts to the public, recording the in-orbit life and work of the astronauts. It includes extravehicular activities, physical exercise, health examinations, and watching the Tokyo Olympics and the Beijing Winter Olympic Games.

Those video clips have gained a large audience across the country. People are interested in knowing how astronauts cut their hair, what kind of moon cakes they eat during the Mid-Autumn Festival, or how they write Spring Festival couplets to celebrate the festival.

The audience found that these brave space heroes are fascinating people in their daily work and lives.

On Bilibili, one of China’s largest video-sharing platforms, a video clip of astronaut Tang Hongbo eating an apple while working in the space station has been played over 879,000 times with almost 1,800 comments. One comment with nearly 9,000 likes says, “that’s one small bite for man, one giant bite for mankind.”

As the frequent exposure of China’s astronauts at the space station has attracted more attention from the general public, the country’s manned space program has become more closely connected with people’s daily life.

The movie box office reflects its popularity. This year’s summer holiday has witnessed a sci-fi comedy “Moon Man,” raking in 2.87 billion yuan (about 409.56 million U.S. dollars) in just one month. The comedy revolves around a Chinese astronaut who finds himself stranded on the moon and struggles to survive alone.

However, it is not the most famous movie about China’s manned space program. The country’s 2019 science-fiction blockbuster “The Wandering Earth” received a total box office revenue of around 4.69 billion yuan.

Its prequel “The Wandering Earth II” has unveiled its first trailer this August, saying its release is set for the Chinese Lunar New Year in 2023.

The people’s interest in the country’s manned space program is beyond being a watcher. In the future, they are hopeful to participate in person.

According to Yang Yiqiang, former commander-in-chief of the Long March-11 rocket project and now chairman of a commercial aerospace enterprise, China will likely start a suborbital travel service in 2025. It will cost about 2 million to 3 million yuan per person.