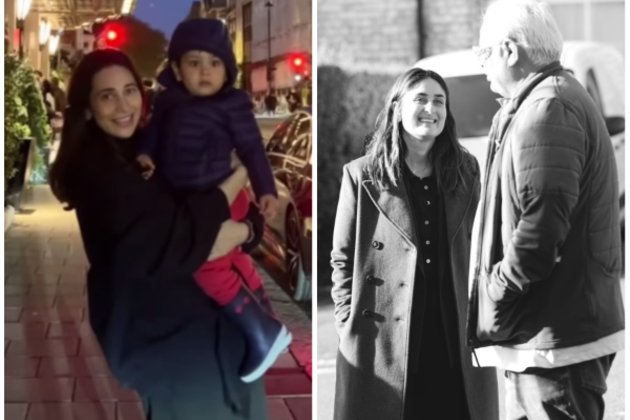 London [UK], November 17 (ANI): Kareena has wrapped up her London schedule for her upcoming film with Hansal Mehta. She was in London for almost a month with her younger son Jeh.

On Thursday, Karisma Kapoor, who was visiting Kareena during her stay in London, shared a photo with Jeh baba and it’s the cutest thing on the internet!In the photo, Karisma is seen holding Jeh in her arms in a busy London street. She wrote, “Best memory with my best boy,” accompanied by the UK Flag and red heart emojis.

Check it out:Talking about Kareena, the film marks the debut of Kareena as a producer. Helmed by Hansal Mehta the film is co-produced Ektaa Kapoor.

On working with Kareena, Ektaa earlier shared, “Kareena has been an actor with a huge, admirable (almost envious) body of work… and while her male co-stars turned producers in due course, she’s finally joined the bandwagon now! I’ve always believed that women have an equal part or play in the business and success of a film.”Ektaa added, “It’s been a hard journey, but an encouraginghappy one! I’m so glad that today, we can empower each other like this! Here’s to wishing Kareena Kapoor Khan the best on her journey as a producer…adding another feather to her already illustrious career! May we have more of her in our tribe!”Talking about other work, she has also wrapped up shooting her OTT debut project helmed by Sujoy Ghosh. The film is based on the Japanese novel ‘The Devotion of Suspect X’, which also stars Jaideep Ahlawat and Vijay Varma in the lead roles. The film will exclusively stream on Netflix. (ANI)