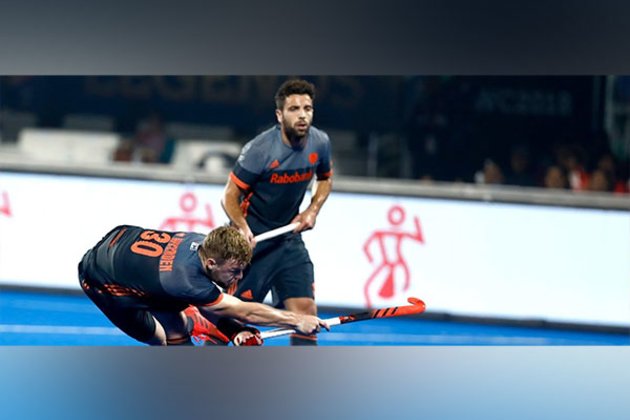 New Delhi [India], October 31 (ANI): Former Netherlands defender Mink van der Weerden represented his country across 191 matches in which he scored 100 goals. He made his senior international debut in 2010 against Spain at the ABN AMRO FIH Champions Trophy, where he finished as the leading goal-scorer of the tournament. The drag-flicker became an integral part of the team setup and continued to rise among the ranks.

Mink represented his country at the 2014 Men’s World Cup in Hague, The Netherlands, where his side finished in second place, losing the Final to Australia. He also played a crucial role in the 2018 Men’s World Cup in Bhubaneswar, India, where once again his team won the Silver medal, going down in the Final against Belgium.

But despite not being able to pick up the Gold medal for the second time in a row, van der Weerden’s favourite World Cup memories are from 2018, when he played the Quarter-Final against India.

“It was a very successful tournament for us. The whole atmosphere was incredible. It was really cool to play India in the Quarter-Finals. It was so loud out there. They were the most special circumstances I have ever played a game in,” Hockey India quoted Mink van der Weerden as saying.

The former Dutch international further recalled the special moment when he scored the second goal against India from a penalty corner and set up a thrilling win for his team.

“The moment that stands out for me took place during the Quarter-Final against India in 2018. It was the moment when we scored the second goal to take the lead,” he recalled.

“It was a full crowd that day and the home fans were loudly cheering for India. But as soon as we scored, all of a sudden, everyone went quiet. It was a really weird moment. Result-wise, it was really good for us. The contrast of playing in such a big stadium and suddenly everyone getting silent was a really special moment for me,” van der Weerden said.

In the next game, Netherlands went past Australia in the Semi-Final after another thrilling match that went down to the shoot-outs.

Mink van der Weerden, who announced his international retirement after the Tokyo 2020 Olympics, expressed hopes that the Netherlands can lift the trophy at the FIH Odisha Hockey Men’s World Cup 2023 Bhubaneswar-Rourkela, which is set to begin on January 13th 2023. Australia, Belgium, Netherlands, India, Argentina, Germany, New Zealand, England, France, Korea, Malaysia, Spain, South Africa, Japan, Chile and Wales are the 16 teams, who will be competing in the tournament.

“I hope the Netherlands can lift the World Cup. Looking at the team and the results they have had over the last 15 months, they have a good chance of going very far in the World Cup and if we reach the Final, third time could be the charm,” the 34-year-old said.

On being asked to pick his favourites for the tournament, van der Weerden named the defending Champions Belgium, along with Australia.

“The favourites, for me, are Belgium and Australia. Both are really good at the moment. They look very strong,” he said.

“Belgium wanting to defend the title will be very motivated. They have not changed much since they won the World Cup. But in Men’s Hockey, the quality has become so much better over the years. There are so many top teams. So, there are three-four other teams as well that can go on and win the whole thing,” van der Weerden added.

Talking about how hockey has changed over the past couple of decades, van der Weerden said that the players have started focusing more on their fitness, and now can have longer careers.

“Hockey over the past 20 years has become more and more about fitness. The young players are becoming fitter at a young age. They are learning at a younger age how to handle their body, their training, their diet and their rest routines. Being able to really have a good grip on their athletic lifestyle will allow players to have a longer career,” he signed off. (ANI)