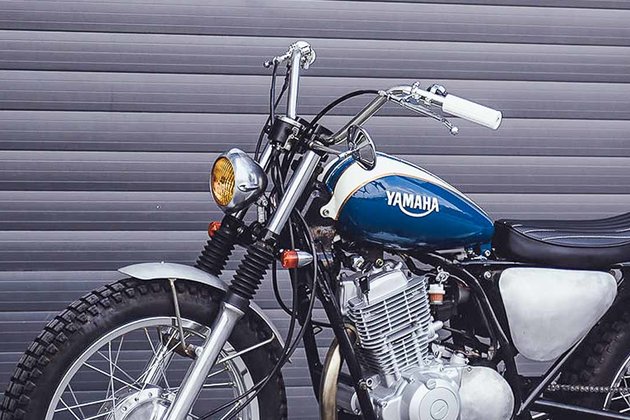 Yamaha SR series is one of the most popular by the Japanese company. It spawns motorcycles with single-cylinder engines. Especially SR400 and SR500 which are some of the most renowned of this series. But Yamaha SR150 doesn’t get same love as it isn’t a retro bike, unlike its bigger siblings.

Heck, SR150 is only Taiwan-specific and is not even sold in JDM. But as we know, motorcycles are beyond just machines with 2 wheels and form an emotional connection with their owner. My father’s 32 years old CD100 is still with us and runs like a charm and will probably outlive me. Same set of emotional connections was with this SR150’s owner.

Hence he summoned Twist.Co, a two-man custom shop based in Taichung City in central Taiwan, to make a custom . Result is perhaps one of the most beautiful motorcycles ever by Yamaha. Let’s take a look.

For starters, its commuter body panels are completely taken off and replaced with what can be described as a work of art. Let’s start with the prettiest part of this build, fuel tank. It is not sourced from other motorcycles which could have made the job easier. But instead, it was fabricated by hand specifically for this build.

Fuel tank of takes a teardrop shape and the seam where its two panels are welded is converted into a stylish ridge instead of filing it away. It also gets an offset fuel filler cap and gets a neat paint of blue, white and gold. This is the only part of this build that is painted while rest of the body panels get a buffed finish with exposed aluminium. Even Triumph-inspired Yamaha logo is custom.

It gets a cute and small round headlight that is reminiscent of retro motorcycles. Handlebar is custom-made too and resembles the ones found on chopper bikes. If you look carefully, it doesn’t get ORVMs at a conventional spot. It doesn’t get bar-end mirrors either. Because it gets a yoke mounted single round ORVM. It is finished in chrome which looks very nice.

It also gets a custom leather seat with Twist.Co badging, an analog speedo, round taillights, round turn indicators, custom fender, and a lot more. This custom scrambler also gets telescopic front suspension forks and twin shock absorbers at the rear. It also gets upsized spoked wheels with 19″ at front and 18″ at the rear which looks a lot better than the stock wheels.

Beautification is not the only brief that Twist.Co got from their client. Engine is thoroughly cleaned and now looks like it came straight out of the factory. It also gets a new racing-spec carburetor from NIBBI along with a red-coloured choke switch. Rear subframe is also custom, though.

gets Taiwan-made knobby tyres by Duro. Looking at the finished bike, it looks anything but a Taiwan-spec commuter SR150. With looks like this, it is sure to turn a lot of heads.