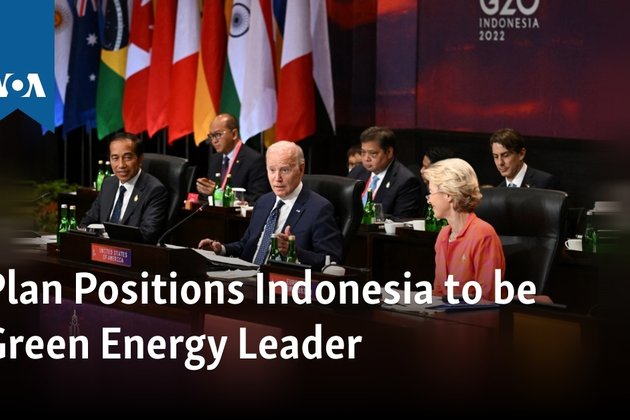 Bali, Indonesia – A consortium of developed nations has announced a multi-billion-dollar plan to help Indonesia speed its transition to renewable energy sources, potentially producing a significant reduction in global heat-trapping gases and making Indonesia a regional leader in green technologies.

The agreement, known as a Just Energy Transition Partnership, was announced this week on the sidelines of the G-20 summit in Bali. It is part of a larger initiative, the Partnership for Global Infrastructure and Investment, which was launched by the G-7 last year and is seen as the West’s bid to counter China’s world-spanning Belt and Road Initiative.

Working with Indonesia will be members of the International Partners Group (IPG), co-led by the United States and Japan including Denmark, Canada, Germany, France, Italy, Norway and the United Kingdom. They will seek to raise an initial $20 billion from public and private sources for the project over the next three to five years.

‘The Just Energy Transition Partnership (JETP) with Indonesia will set a course for a greener, cleaner … future full of opportunities for the Indonesian people,’ said European Commission President Ursula von der Leyen, according to an EC press release. ‘They are the ones who will reap the benefits of the transformation of their economy as Indonesia becomes a hub for renewable energy.’

Under the agreement, Indonesia is to lead preparation of a comprehensive investment plan known as the Partnership Action Plan over the next six months. The goal of the plan is to expand the use of renewable energy sources and phase out coal-fired electricity generation, bringing the nation’s power sector to net-zero greenhouse gas emissions by 2050 – a full decade earlier than under current projections.

Assistance with the project is expected from the accelerated coal transition programs of the World Bank, the Asian Development Bank and the Climate Investment Fund. The partnership is the second of its kind after a similar JETP with South Africa was launched at last year’s COP26 climate conference in Glasgow.

John Morton, the U.S. Treasury’s first climate counselor and a recognized leader in the field of climate finance, said that based on the investment value brought together under the terms of the new JETP, it is arguably the largest country-specific climate investment partnership ever.

If all goals of the partnership are achieved, total emissions will be reduced by about 300 megatons between now and 2030 and by more than 2 gigatons by 2060 compared to business as usual.

‘Just to put those numbers to perspective,’ Morton said, ‘300 megatons is the equivalent to taking half of U.S. passenger cars off the road for one year. Two gigatons is equivalent to 15% of global power sector emissions in any given year. So, these are globally significant numbers that we are partnering with Indonesia to achieve and providing finance to support that ambition.’

Tata Mustasya, energy and climate manager of Greenpeace Indonesia, believes that Indonesia will be able to achieve these ambitious goals if it establishes regulatory frameworks that provide clear disincentives for coal and incentives for clean and renewable energy.

But he said there is no room for mixed signals, and that the Jakarta government must make institutional and government reforms and take concrete steps to close coal power plants.

‘The coal phase-out and shift to clean and renewable energy should meet economic justice and ecological justice,’ Mustasya said. ‘The government needs to ensure that energy will be available and affordable, including for low-income groups.’

He called for Indonesia to ensure a smooth transition for coal workers, not only in coal power plants, but also in coal mining.

Andry Satrio Nugroho, head of the Center for Industry, Trade and Investment at the Institute for Development of Economic and Finance, a Jakarta-based research institution, called for supervision by a designated financial institution and international partners to ensure the funds are properly used.

A majority of electricity in Indonesia is still generated by coal power plants. Nugroho warned that a future energy transition could cause a temporary energy crisis if the transition is not effectively implemented. This could cause a multiplier effect where inflation drastically increases and food prices soar.