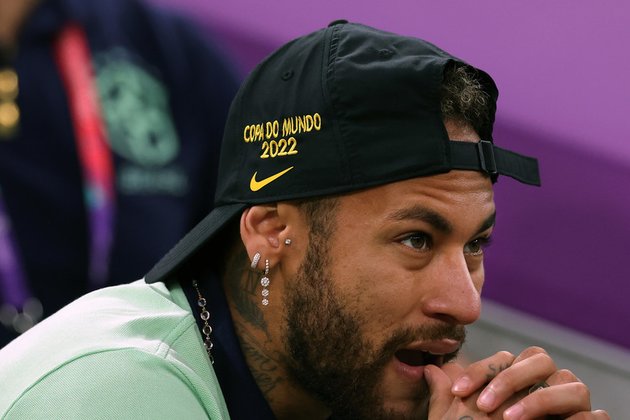 Paris Saint Germain and Brazil superstar Neymar is battling to recover from injury for Brazil’s last 16 match against South Korea on Monday at the Qatar 2022 World Cup.

The 30-year-old suffered an ankle injury along with right back Danilo when Brazil beat Serbia 2-0 in their opening Group G game.

Danilo is showing signs of recovering, but whether Neymar will be involved against the South Koreans is touch-and-go, team doctor Rodrigo Lasmar confirmed.

“Regarding Neymar and Alex Sandro, we think we have time on our hands and there is a possibility,” Lasmar told reporters after Brazil’s 1-0 loss to Cameroon on Friday.

“Let’s wait [to see] what their transition will be – they have still not started to practice with the ball and it’s something they will do tomorrow. It will be important to see how they respond to this new style, so depending on that, we will make a call.

“Danilo has been evolving very positively and today he did intense work with the ball and has adapted functionally very positively. The expectation is tomorrow he will be able to train normally with all players,” Lasmar added.

“Let’s observe what happens and if everything is OK, we have very high expectations that he will be available for the next match.”

When Neymar was injured, the Brazil camp initially indicated that he would be ready for the last 16.

In recent days, however, reports have spread that Neymar may struggle to start in a potential quarterfinal clash against Japan or Croatia, and instead make a cameo off the bench.

The current edition of the tournament could be Neymar’s last appearance at the World Cup.

Following Friday’s loss to Cameroon in which coach Tite fielded a second-string team, Arsenal striker Gabriel Jesus was ruled out for three to four weeks with a knee injury, and his participation at Qatar 2022 is over, according to Globoesporte.

“Medical tests indicate that both will miss the remainder of the championship,” their report read, as left back Alex Telles, who similarly suffered a knee injury, was also mentioned. “Alex Telles may have to undergo surgery, he left the pitch in tears.”

Brazilian newspaper O Globo subsequently claimed that Brazil wants to keep Jesus and Telles around to cheer on the team in its quest to deliver a record sixth World Cup title.

Should Tite’s men get past South Korea and then either Japan or Croatia, eternal rivals Argentina possibly await in the semifinals.