HomeLatestNational Games: Gujarat cross their best medal haul ever with their tenth...
Latest

National Games: Gujarat cross their best medal haul ever with their tenth gold 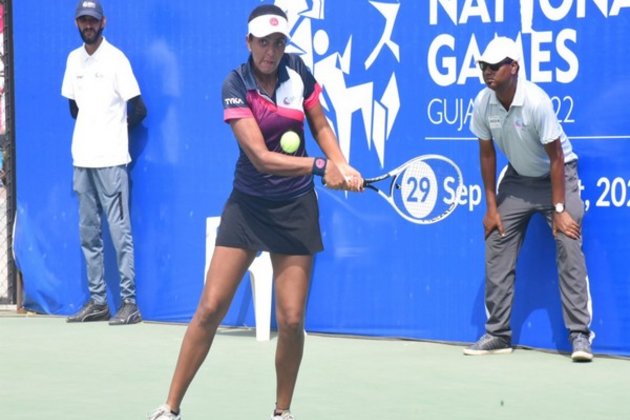 Ahmedabad (Gujarat) [India], October 8 (ANI): Gujarat have truly arrived as a sporting state. With five days left for the immensely successful 36th National Games to draw to a close, the hosts have surpassed their best-ever performance in the Games, justifying the State’s decision to step in at short notice and stage the Games.

As hosts, the state had already created history by organising the National Games in less than 100 days. Gujarat upgraded and spruced up all the venues in six cities and left no stone unturned to give over 7,000 athletes a memorable experience. But with their athletes grabbing the opportunity to showcase their rise, Gujarat’s decision has been vindicated.

“I commend the Gujarat government for taking up the challenge of hosting the Games in such a short time,” Prime Minister Narendra Modi said at the Opening Ceremony 10 days back.

The sports fans of Gujarat will, however, be more pleased with how their athletes have performed. The moment they won their 10th gold on Friday night, with their star swimmer Maana Patel herself scooping three from the swimming pool, they had recorded their best return in the National Games.

“The sports scene in Gujarat has changed dramatically in the last decade. The government has introduced many schemes, including the highly popular Shaktidoot scheme. Khel Mahakumbh has motivated the masses to take to sports,” Maana Patel said when asked about the support from the state government.

Most hearteningly, the state that has taken a keener interest in sport only in recent times, has accumulated medals from 11 different disciplines, ranging from Aquatics to Yogasana, Badminton to Wrestling and Judo to Shooting. Back in 2015, the majority of Gujarat’s 20 medals came from Tennis and Swimming.

Pooja Patel who won women’s gold in Traditional Yogasana, Archer Amita Rathva, who won an individual silver and team bronze in the Indian Archery event, Hinaben Khalifa, who became only the second woman wrestler from the state to win a National Games medal, are prime examples of the wide range of performers.

The likes of Olympians Elavenil Valarivan (shooter), Ankita Raina (tennis) and Maana Patel (swimming) have all become India stars. Indeed, at Tokyo2020, six women players, including three para-sportspersons, from the state were part of the Indian contingent, which is highly commendable.

“We have introduced a very progressive Sports Policy. There are several schemes to not only promote sport at the grassroots level but also to hunt for talent and nurture it,” Arjun Singh Rana, Swarnim Gujarat Sports University Vice-Chancellor, said.

The Shaktidoot scheme itself currently supports 64 hand-picked athletes from 14 sports. The DLSS (District Level Sports Course) scheme along with the Khel Mahakumbh have also been crucial triggers that have seen Gujarat rise from a poorly 28th position in the medal table in 2011.

“All together, Gujarat’s top sportspersons enjoy financial assistance at every stage of their career, which prepares them to compete at the highest levels in world sport. This is the result of all the hard work that we have put over the years, including the massive investments made in sports infrastructure in tune with our progressive sports policy, ” Arjun Singh Rana added.Gujarat today also boasts of many high-performance centres to train their athletes, in addition to world-class stadia.

“The PDDU Stadium in Surat is one of the best indoor facilities that I have seen,” two-time Olympic medal winner PV Sindhu said during her visit to Gujarat. “It can host not only the India Open but any mega international tournament too,” she enthused of the stadium, which hosted the country’s finest table tennis and badminton players.

Chief Technical Officer and Chief National Coach of rowing, Ismail Baig couldn’t stop gushing over the Sabarmati course. “It is easily the best in the country. Gujarat can now become the hub for international events,” he declared even as a couple of Olympians attested that it was even better than the course used at the Tokyo Olympics.

It can only be onwards and upward for the progressive state. (ANI)