How the green agenda is being used to fleece the naive 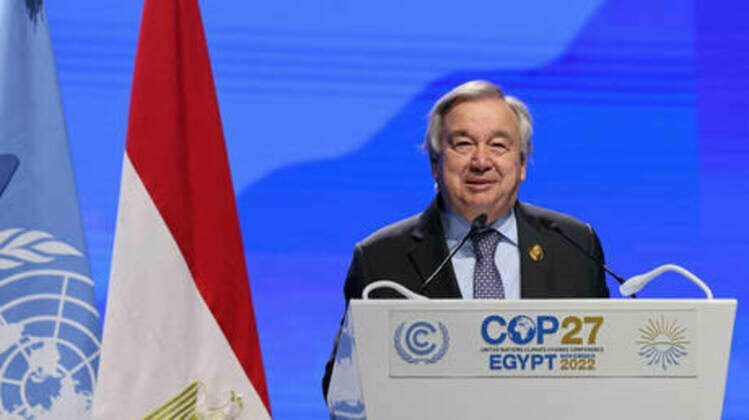 ‘Greenwashing’ has gone mainstream, with both governments and corporations profiting without taking any real steps to protect the climate

Banks and corporations making pledges of ‘net-zero’ emissions are taking the public for a ride, according to a new United Nations report released at this week’s COP27 climate change conference. “We must have zero tolerance for net-zero greenwashing,” UN Secretary General Antonio Guterres said, in reference to the concept of virtue-signaling a green agenda for marketing purposes as a strategy to gain more business, all while failing to back up the claims in practice.

Oh, so the airlines asking whether you want to freely donate extra cash when buying a plane ticket to offset the carbon footprint of your flight aren’t technically achieving much beyond making the insufferably sanctimonious feel good about themselves? Or that the energy companies using renewables as window dressing are nonetheless continuing to invest in fossil fuels? You don’t say! In case the idealists haven’t noticed, there’s currently an energy crunch in the West due to Western sanctions on fuel from Russia – and renewables aren’t anywhere near ready for prime time as a replacement.

Germans are turning instead to coal and firewood, while France is scrambling to ramp up nuclear power. The EU even backpedaled at the beginning of the year in labeling gas and nuclear ‘green’ – which now conveniently allows its leaders to run around to fossil fuel pariah countries asking for desperately needed energy.

Might as well, though, for all the good that this pricey and pretentious charade is doing. The UN says that more financing, to the tune of up to $340 billion per year by 2030, is the key. Anything less is apparently futile. The notion of massive funding being necessary to prevent Earth’s temperature from increasing by 1.5C above pre-industrial levels is a tough sell, particularly in the absence of any logical explanation of how the cash would credibly be used to realistically adjust the thermostat, so officials now seem to be trying a new sales pitch. “The world must step up and protect people and communities from the immediate and ever-growing risks of the climate emergency. We have no time to lose,” Guterres said, with the UN citing things like flooding in Pakistan and multi-year droughts as justification for the funding.

Greenwashing is just another way of scamming the hopelessly naive. And no one does it better than governments themselves, who have managed to relieve taxpayers of countless billions to fill slush funds under the guise of saving the world.

And now US President Joe Biden is using a green pretext to protect US economic interests to the detriment of European allies – even as the US ramps up fossil fuel liquefied natural gas exports to the EU. Biden’s Inflation Reduction Act is conveniently framed as a green energy initiative, offering US consumers tax incentives to buy American electric cars with batteries that have at least 40% of components from the US or a country with which it has free trade. Germany and France view the measures as blatant protectionism.

“We must react fast. I’m calling for a united, strong and coordinated response from the EU to our American allies. There is a risk of a major shock for French and European industry. Either they will be resolved there, and we hope they will, that’s why we have the task force to discuss this, or we will have to go to the WTO and envisage retaliatory measures,” French Economy Minister Bruno Le Maire said. “I have not been assured that the American side has completely grasped how great our concerns about the consequences are,” German Economy Minister Christian Lindner added. Japan and South Korea are also protesting the new move, demanding equal treatment for their products.

It was only a matter of time before a Western government would use an environmental pretext for self-serving economic reasons. “The Americans are buying American and pursuing a very aggressive strategy of state aid. The Chinese are closing their market. We cannot be the only area, the most virtuous in terms of climate, which considers that there is no European preference,” Macron told Les Echos last month, suggesting that the greenwashing of the protectionism scam is something that the EU should be copying. Macron even greenwashed his anger and frustrations at the Cop27 conference, with a jab at the US and China to “pay their climate fair share.”

Is there any limit to greenwashing? Apparently not. Ukrainian President Vladimir Zelensky said in a recorded message to the conference that “there can be no effective climate policy without peace.” Since Zelensky apparently considers peace to be won only through endless cash and weapons, it looks like he’s now greenwashed those, too.

Why should the elites have all the fun? The average person might want to try greenwashing their life by projecting environmental virtue everywhere they go in order to extract a few extra bucks out of folks on a daily basis – like from the taxi driver who spent too long idling in traffic, or from the houseguest who opened the window and made you have to use that much more heat, or from the friend who ordered the meat dish at dinner responsible for the most Earth-killing flatulence while it was alive.

Anyone who hasn’t caught on to the green scam by now would likely welcome the increased citizen policing and be only too happy to comply with demands that they empty their wallet – into your hands, into a lake, or a toilet, for that matter – to compensate for their transgressions.