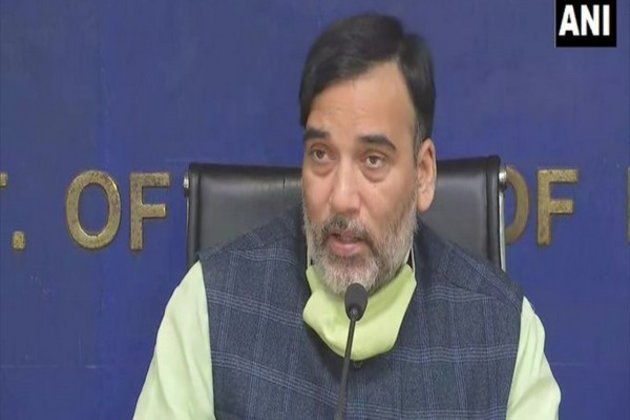 New Delhi [India], October 30 (ANI): Delhi Environment Minister Gopal Rai has claimed that the speedy flow of river Yamuna from Uttar Pradesh is the cause behind foam formation atop the river in the national capital.

“High-speed river flow from UP is the main cause for the foam formation over the river in Delhi especially in the Kalindi Kunj area,” Delhi environment minister Gopal Rai said quoting the scientists of Delhi Jal Board.

Addressing a press conference in the national capital, the environment minister cited “multiple reasons” as a cause for the increase in the pollution levels during the winter season in Delhi and its nearby areas.

Rai further said in the meeting to discuss pollution levels in Delhi NCR, that the AQI level is likely to reach over 400 from November 1.

He assured that a ‘monitoring committee’ will be formed to keep a watch over construction works that are still in progress despite the imposition of a ban in the wake of the deteriorating air quality of the National Capital Region.

The Commission for Air Quality Management (CAQM) in NCR and adjoining areas imposed this ban on Saturday stating that all construction works other than the one of Central Vista need to be stopped amid the rising pollution levels.

The Graded Response Action Plan (GRAP) sub-committee decided to implement Stage III of GRAP in the entire NCR in a move to prevent further deterioration of air quality.

He highlighted that the Air Quality Index (AQI) in Anand Vihar and Vivek Vihar has been reported highest at the levels of 440 and 408 respectively, Rai added.

Accusing the BJP-led central government for the stubble burning in Punjab — which is another cause of pollution in neighbouring cities including Delhi, the environment minister said, “Punjab government is ready to give financial support to the farmers after banning stubble burning but it is the Centre which is not ready to contribute to it monetarily.”The decision of the Delhi government to ban firecrackers was also criticised by the BJP and they are also not letting the onset of campaign ‘Red light on, Gaadi off’ here.

“BJP is also restricting the Red Light On, Gaadi Off campaign, despite the fact that it helped bring pollution down to 15 per cent levels in the national capital in the previous year,” he said.

Rai on Thursday had claimed in a press conference that the campaign was to be rolled out on October 28, however, it was being postponed as the approval was due from the L-G’s office. He added that the file was sent on October 21 for approval.

Denying the charges, L-G office sources said that the file that was sent to the L-G office mentioned October 31 as the date of rollout instead of October 28 as claimed by the Delhi minister.

Further mentioning about the cleanliness of Yamuna, Rai emphasised on the five years’ time sought by Delhi CM Arvind Kejriwal stating that such a “huge problem cannot be resolved in two days.”To address the deteriorating air quality of the National Capital Region, the Sub-Committee for invoking actions under the Graded Response Action Plan (GRAP) of the CAQM in NCR and adjoining areas held an emergency meeting on Saturday.

This meeting was conducted after the third phase of GRAP in Delhi NCR.

While comprehensively reviewing the overall air quality parameters during the meeting, the Commission noted that due to unfavourable meteorological conditions with slower wind speed and sudden spike in farm fire incidents, it is considered necessary to implement Stage III of GRAP with immediate effect in the entire NCR.

The CAQM further noted that the winds are forecasted to be calm in the coming days and the wind direction is likely to change course frequently. Thus, there is a high likelihood of the pollutants getting trapped in the region and not getting dispersed effectively.

The CAQM had further appealed to the citizens of NCR to cooperate in implementing GRAP and follow the steps mentioned in the Citizen Charter under GARP. Apart from that, a 9-point action plan as per Stage III of GRAP was made applicable in the entire NCR.

The 9-point action plan includes steps to be implemented/ ensured by different agencies and Pollution Control Boards of NCR and DPCC, as per the official statement. (ANI)

Facebook
Twitter
Pinterest
WhatsApp
Linkedin
LINE
Previous article
India boosting its capabilities with mantra of ‘Make in India and Make for the globe’, says PM Modi
Next article
“Reimagining the way we do business in India…”Airbus CCO, Christian Scherer