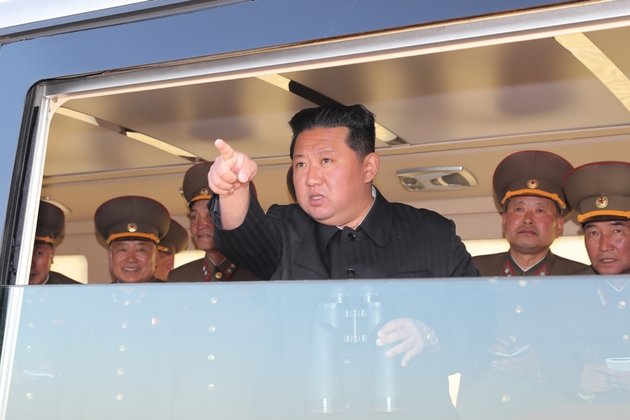 Geopolitical rivalry between Washington and Beijing, coupled with Russia’s invasion of Ukraine, are decreasing opportunities for diplomacy and increasing the likelihood of the U.S. taking firmer actions against North Korea than it has in the past if Pyongyang undertakes an expected seventh nuclear test, experts said.

‘There is no question that the United States and [South Korea] will react quickly, decisively, and in sync to a seventh North Korean nuclear test,’ said Evans Revere, a former State Department official with extensive experience negotiating with North Korea.

At a press briefing on Tuesday, U.S. State Department spokesperson Ned Price said, ‘There would be a profound cost and profound consequences’ if North Korea conducts a nuclear test.

Last week, the U.S., South Korea, and Japan warned they will respond to a North Korean nuclear test on an ‘unparalleled’ scale.

The U.S. sent its nuclear-powered aircraft carrier USS Ronald Reagan to the South Korean port of Busan in September to conduct joint drills with Seoul and redeployed it to South Korea as a show of force after Pyongyang launched an intermediate-range ballistic missile (IRBM) over Japan on October 4. The U.S. deployed two B-1B bombers with nuclear capabilities to Guam in October as threats grew. These could be sent to South Korea on a rotational basis.

These deployments would be coupled with ‘extensive allied military exercises’ and the ‘issuing of new sanctions against North Korean entities’ by the U.S. and its allies and partners, Klingner said.

On Wednesday, North Korea fired at least 23 missiles off its east and west coasts, a record number in a single day. One of the missiles, a short-range ballistic missile, fell into a disputed inter-Korean maritime border zone for the first time since the peninsula divided into two Koreas in 1945.

In response, South Korean fighter jets fired three precision air-to-surface missiles crossing into the North’s side of the maritime border.

Pyongyang threatened on Tuesday to launch a ‘strategic mission’ against the U.S. and South Korea to make them pay ‘a terrible’ and ‘horrible price’ if the allies continue ‘an aggressive and provocative’ joint air drill called Vigilant Storm ‘targeting’ North Korea.

The U.S. and South Korea began large-scale joint aerial drills on Monday involving about 240 warplanes and 1,600 sorties, the largest number ever involved in the annual operation, according to the U.S. Air Force.

Tensions from the latest flareup on the Korean Peninsula, building from North Korea’s recent sequence of missile tests that began September 29, is expected to escalate even further after its anticipated nuclear test.

Ken Gause, director for the Adversary Analytics Program and CNA, said the escalating tension has yet to reach its peak. He said the tension is ‘still ascending’ much as it was before North Korea’s sixth nuclear test on September 3, 2017.

After the sixth nuclear test, a diplomatic opportunity opened up and tensions eased into dialogues that remain stalled, but current tensions are less likely to subside. Instead, experts told VOA the tensions are likely to become increasingly dangerous given the security environment dominated by rising threats from China and Russia and their ties with North Korea.

‘Moscow is making nuclear threats in Europe and [China] has adopted a more aggressive posture in the East Asia region,’ Revere said.

‘Pyongyang has very emphatically aligned itself closely with [China] and Russia. This has complicated the security calculus of the United States, [South Korea] and Japan, and other like-minded countries in the region,’ he added.

Ties among North Korea, China and Russia are likely to grow tighter and harden into a regional bloc that will intensify its confrontations with the U.S. and its allies, which are aligning more closely into a bloc supporting Washington, according to experts.

‘Those blocs have been there forever,’ Gause said, adding, ‘They’re just beginning to harden now.’

Patrick Cronin, the Asia-Pacific security chair at Hudson Institute, said U.S. allies in Europe and Asia including Seoul, Tokyo, and Australia have also consolidated their ‘political will for deterrence’ against threats from North Korea.

Pyongyang has thrown its support behind both Beijing and Moscow in confronting the U.S.

Gause said North Korea is supporting China and Russia in exchange for their veto power, which could block any resolutions at the U.N. as they did in May after the U.S. introduced a resolution that would impose tougher sanctions in response to Pyongyang’s renewed ballistic missile tests including ICBMs.

When the U.N. Security Council met on October 5 after North Korea flew an IRBM over Japan, China and Russia defended North Korea’s action, saying Pyongyang had a right to defend itself.

Harry Kazianis, president of the Rogue States Project, said, ‘The world was frankly a very different place back in 2017.’

He continued, ‘China and the United States were both very concerned about a North Korean nuclear crisis that could spiral out of control, and Beijing was willing to go along with increased sanctions. … With China and Russia at odds with the U.S. [now], there is little hope of increasing sanctions’ on Pyongyang.

US and South Korea

‘In 2017, South Korea was led by a government that prioritized dialogue and reconciliation with Pyongyang and sought to downplay or even ignore the rising threats from North Korea,’ Revere said. ‘The United States today is working much more in sync with [South Korea] and Japan than it did in 2017.’