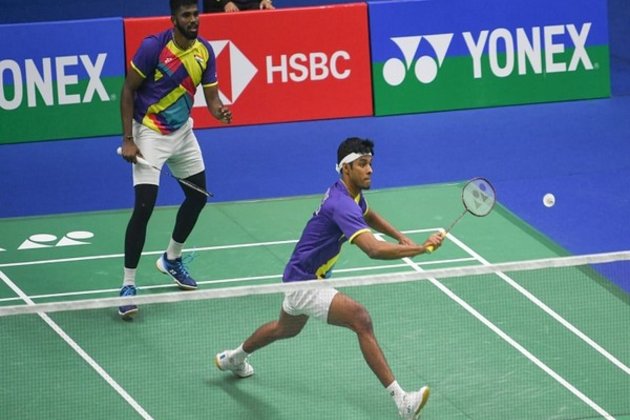 Tokyo [Japan], August 27 (ANI): The Indian pair of Chirag Shetty and Satwiksairaj Rankireddy were defeated by the Malaysian duo of Aaron Chia and Soh Wooi Yik in the semifinal of the men’s doubles category in the ongoing BWF World Championships 2022 on Saturday.

Despite the loss, the duo will return to the country with a bronze, becoming the first Indian men’s pair to do so at the Championships. They had to settle for a bronze after their loss in the semi-final.

The Indian duo was off to a good start. The first game was a closely contested one with fast-paced action. Chirag and Satwik prevailed in the first game by 22-20.

However, the Malaysian opponents made a comeback in the second game and won it by 18-21 to set up an exciting decider game. Though Chirag and Satwik played well, they just could not match the stroke play and speed of their opponents.

Chia and Yik kept their composure and had an advantage over the Indians in the final game. Though Chirag and Satwik kept fighting back one point at a time, any hopes of victory were done away with as their opponents quickly clinched the required final few points to win the game 16-21.

This match lasted for an hour and 17 minutes.

It will also be India’s second medal at the Championships from a doubles pair. The duo has given India its 13th medal at the prestigious event.

Earlier on Friday, the duo made history by becoming the first Indian men’s pair to secure a medal in BWF World Championships after defeating Japanese duo of Takuro Hoki and Yugo Kobayashi in the quarterfinals.

Chirag and Satwiksairaj had stormed into the quarterfinals on Thursday defeating the Denmark duo of J. Bay and L. Molhede in their round of 16 match.

It took only 35 minutes for them to eliminate their Danish opposition from the competition within two straight games 21-12, 21-10.

Earlier, in the recently concluded Commonwealth Games 2022 in Birmingham, Chirag and Satwik had also won a gold medal in the men’s doubles category.

BWF World Championships 2022 started in Tokyo on August 22 and will go on till August 28. (ANI)