HomeLatest"Absolutely none..." Hardeep Puri when asked about 'moral conflict' on buying Russian...
Latest 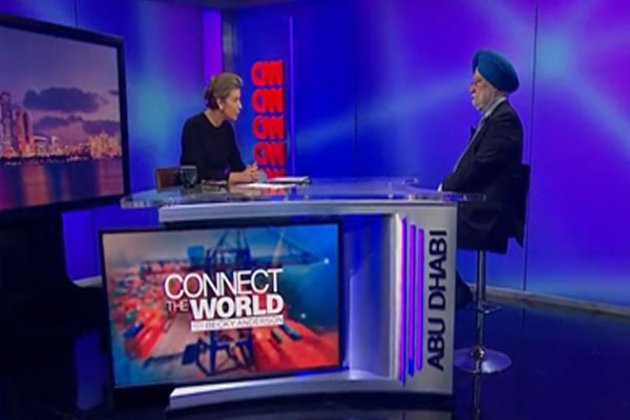 Responding to a question by CNN’s Becky Anderson who questioned Puri on whether India had “qualms” over purchasing so much from Russia, the minister said: “Absolutely none, there is no moral conflict, if somebody wants to take an ideological position…We don’t buy from X or Y, we buy whatever is available. I don’t do the buying, it’s the oil companies who do the buying.

Puri defended India’s purchases stating that India only bought 0.2 per cent, not 2 per cent of Russian oil and it buys in a quarter what Europe buys in one afternoon.

Asked whether India is benefitting from discounted rates of Russia, Puri said, “Let me first try and correct your perspective, we ended the financial year 2022, the purchases of Russian oil were not 2 per cent, it was 0.2 per cent. Moreover, we still buy a quarter of what Europe buys in one afternoon. So, let’s be very clear about what the perspective is.”Asked about India’s backup plan if the West decides to tighten the oil ban from Russia, Puri said “We have many backup plans, I don’t look at the way you are looking at it. We have healthy discussions going on with the US and Europe. We don’t feel any pressure, Modi’s government doesn’t feel the pressure. We are the fifth largest economy in the world, we are the one country, which is making the transition. When you have an increase in the oil prices, they have consequences – one of it is – there will be inflation and recession, another is we will make the transition in green energy.”The union minister also cleared the air about Russia being the largest supplier of oil to India.

He further stated that India owes a moral duty towards its people.

“We owe our moral duty to consumers, we have a 1.3 billion population and we have to ensure that they are supplied with energy, whether petrol or diesel. We were the only country in the world, which at the time when we were feeding 800 million people free meals a day which we are still doing. The Government reduced its revenue in order to make sure that the prices of petrol ban didn’t go up.”Puri had last month in Washington after his bilateral meeting with US energy secretary Jennifer Granholm stated that the Indian government has a moral duty to provide energy to its citizens and it will continue to buy oil from wherever it has to.

“India will buy oil from wherever it has to for the simple reason that this kind of a discussion cannot be taken to the consuming population of India,” the minister said reiterating New Delhi’s stand on buying oil from Russia amid the ongoing Ukraine war.

Meanwhile, during the CNN interview aired on October 31, asked about whether India was becoming a backdoor into Europe for Russian oil, which is imported into India where it is refined before being exported to Europe, the union minister said, “That was done by some private sector companies, not by OMC’s. Who buys Russian oil, andwhere it is refined, we have nothing to do with that. The government doesn’t do the buying. The oil trade is conducted by economic entities.””Today, I met a minister from Guyana, they have got a production company, we are buying from Canada. We bought from the US, USD 20 billion worth which is half of what we buy from OPEC. We will buy oil, and gas from wherever we can get it,” Puri saidThe union petroleum minister also highlighted the increase in oil prices after the West and US banned purchases of Russian oil.

“First, you should address this question to the EU, and US because if India did not buy or someone else didn’t buy Russian oil and it goes off the market, what would happen to international prices? …prices will go up to USD 200,” said Puri.

Puri emphasized that if the European Union wants to come up with something, they will talk to India.

“If the EU wants to come up with something, they will talk to us, we will examine- what is on offer now. We have a situation where Hungarian oil could come through the pipeline and it’s exempt from the so-called price cap. Russian oil goes to China through the pipeline, it is exempt, and Japan can buy. I want to find to whom the price cap is aimed,” added Puri in an interview to CNN’s Becky Anderson.

The US and Europe are attempting to force other countries to toe their line in imposing price caps on Russian oil beginning this December.

On India’s cooperation with the G7 stance, i.e. tapping the price of Russian sea-borne oil exports, Puri said that the proposal is yet to be formalized.

“I am surprised that you are fixated on the proposal, which has not been fully spelt out. India will examine it, and respond according to its national interest. We will take a view and will discuss it with everyone,” said Puri. (ANI)