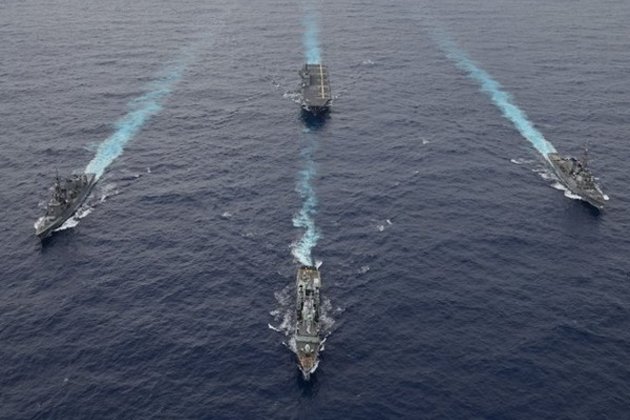 Washington [US], October 5 (ANI): Admiral Samuel Paparo, commander of the US Pacific Fleet said that the US could upset Chinese designs of blockading Taiwan.

He said that if China imposed a maritime blockade of Taiwan, the US and its allies would have the capability to break it, reported Nikkei Asia.

“The question that follows is ‘Do the allies have the capability to break that blockade?’ And the answer to that is a resounding yes.”China certainly has “the number of vessels, and the capability at sea to execute a blockade,” said Paparo to Nikkei and a group of reporters travelling with US Secretary of Defence Lloyd Austin to Hawaii last week.

Paparo expressed confidence that Washington could do so even on its own, citing its volume of firepower and “superiority in key domains,” likely a reference to nuclear submarines and other undersea forces, reported Nikkei Asia.

Meanwhile, a US defence official raised concerns that Beijing could use other means to cut off maritime access to Taiwan while concealing its intention to do so, similar to the live-fire drills announced after US House Speaker Nancy Pelosi’s visit to Taipei.

China conducted large-scale military drills in August, it designated exercise areas near the Taiwanese ports of Taipei and Kaohsiung. Chinese forces fired 11 ballistic missiles during the drills, and there was a nonzero risk that one could have landed outside these zones.

The exercises forced civilian vessels and aircraft to change their routes. “That’s a pretty significant impact on normal activities,” the official said.

The line between warning civilian ships in advance of military exercises to keep them safe, and imposing a blockade to keep them out, is blurry.

“You could essentially blockade Taiwan’s access, through the repeated imposition of these kinds of closure areas, legally, safely, and in a way that would be extraordinarily difficult, either for Taiwan or the US, to challenge and to counter,” the defence official said.

Moreover, Beijing could deny any US accusations that it intended to impose a blockade. And if Washington could not conclude definitively that one was in place, it would not be able to conduct an operation to break it, reported Nikkei Asia.

However, a senior Taiwanese official asserted that Taipei would not bow to Chinese pressure.

“I think the Chinese pressure campaign, coercion campaign, has proven counterproductive,” the official said. “These coercive measures strengthen our people’s determination, our will, to defend our own democracy, and rally international support to Taiwan.”Moreover, US President Joe Biden has stated that Washington would defend Taiwan if China invaded, but has provided no details.

The Kinmen and Matsu islands near the Chinese province of Fujian, along with the island of Taiping in the South China Sea, are seen as particularly tough to defend. (ANI)