HomeNationalUniversal Studios Japan issues reminder about showing too much skin inside the...
National 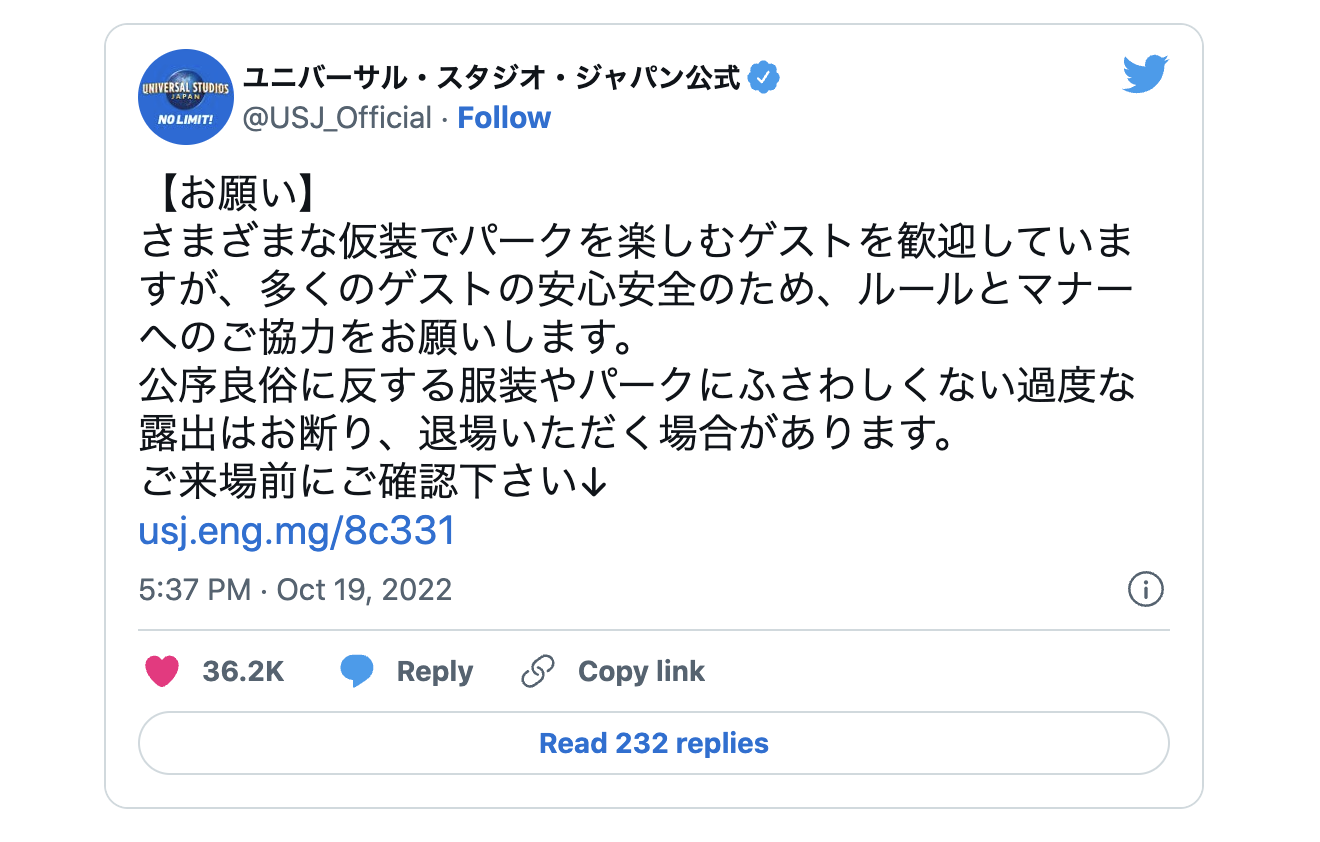 Osaka’s Universal Studios Japan is currently being overrun by zombies and infested by “Resident Evil” monsters as part of its Halloween celebration. However, a recent warning put out by USJ wasn’t to caution guests to be on guard against creatures trying to eat their brains, but a reminder that there are limits to how much skin they’re allowed to show inside the park.

“A request: We wish to welcome guests in a wide variety of costumes to our park,” begins the tweet from USJ’s official account, “but we ask for your cooperation in complying to rules and manners to ensure the peace of mind and safety of our many guests. Clothing that is inappropriate or excessively revealing is prohibited, and may result in being asked by staff to leave the park.” The tweet also asks those planning to visit Universal Studios Japan to review its rules regarding acceptable attire, as found on the park’s website.

The mention of “costumes” in the statement isn’t a vocabulary mix-up. In contrast to Tokyo Disneyland, which generally prohibits guest costuming, USJ has no standing rule against guests dressing up as fictional characters, even ones not affiliated with Universal. That’s made USJ a popular place for cosplayers and others looking to take photos that will generate buzz on social media. However, just a few days before USJ’s warning tweet about overly revealing outfits, a series of photos taken by a group of five women while at USJ started attracting attention online. While some of them wore hair accessories with cat-ear or maid motifs, many felt the rest of their attire was closer to lingerie than cosplay outfits (a selection of the photos can be seen here).

While not specifically referenced in the park’s tweet, the timing suggests that management felt the incident necessitated a reminder that while USJ has a reputation as the major theme park with the more relaxed dress code, it still has policies guests have to abide by, and online commenters have applauded the reassertion.

“Like, you should consider that there are little kids at the park before you decide to put on an impromptu lingerie show.”

“That sort of thing will make families feel really uncomfortable.”

“They went to far. It’s like they were dressed to go clubbing.”

“Dressing like that is going to give people a bad image of USJ.”

Honestly, the attire in the photos in question is pretty far beyond what’s considered appropriate in general for being out and about in public in Japan, so the vast majority of people are unlikely to run into any clothing-related problems at USJ. If you want to double-check the dress code, though, it can be found here, but the important takeaway is that Universal Studios Japan’s “No Limit” slogan doesn’t apply to how much skin guests are allowed to show.

— Awesome-looking Godzilla vs. Evangelion video is a real project, and a real monkey’s paw【Video】