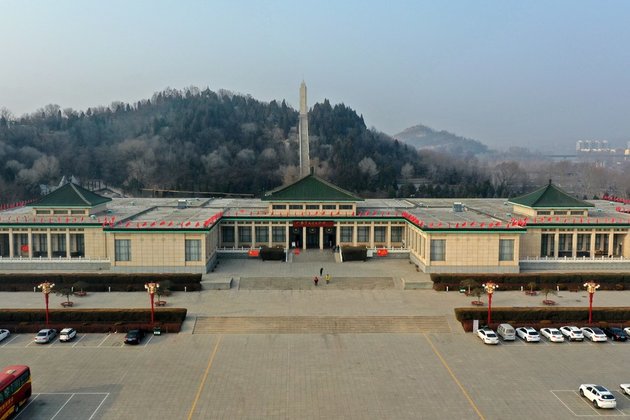 TAIYUAN, Nov. 1 (Xinhua) — Nestled deep in the Taihang Mountains, the Huangyadong area once lagged behind in development due to isolation, but it has since embarked on a new development path, with locals engaged in red tourism.

Located in Licheng County of Changzhi City, north China’s Shanxi Province, the Huangyadong area is famous for a former arsenal site founded by the Eighth Route Army, which was led by the Communist Party of China during the Chinese People’s War of Resistance Against Japanese Aggression.

“Tourists’ appetites for history and revolutionary stories have increased significantly,” said local farmer Li Yungang, who jumped on the red tourism bandwagon in 2006 and runs an agritainment business in Huangyadong.

Li has seen a growing number of visitors pouring into Huangyadong to learn about red culture. “I can offer over 50 rooms and gain a monthly income of more than 300,000 yuan (about 41,801 U.S. dollars) in peak season,” said Li.

Over the years, the Huangyadong site has been developed into a national 4A scenic spot, the second-highest rating in a five-level assessment system for the country’s scenic areas.

The vitality of the Huangyadong area is the epitome of efforts made by Licheng’s government in recent years to fully utilize its 521 revolutionary sites to develop red tourism around the county, with investments totaling nearly 10 billion yuan.

With a slew of major red tourism projects developed by the local government, Licheng County saw 636,000 tourist trips in the first nine months of this year, according to the county’s culture and tourism bureau.

From January to September 2022, the tourism sector produced extra income for over 1,300 households in Licheng, the bureau said.

In addition to tourism, other emerging industries have also promoted the development of old revolutionary bases in Shanxi Province.

After a downpour, visitors surprisingly found that there was no ponding on some streets of Wuxiang County, known as “the headquarters of the Eighth Route Army” in Changzhi City.

These streets are paved with a new type of permeable brick, which is produced by a local environmental protection technology company.

“High-performance permeable bricks are among urgent demands for reducing waterlogging in urban areas,” said Hao Jinting, chairman of the company, adding that their bricks with high permeability and freezing resistance had been applied in some 30 cities nationwide.

Heavy reliance on the coal industry once hampered the development of Wuxiang. In recent years, the county has ramped up efforts to boost emerging industries and help a batch of traditional enterprises accelerate transformation and upgrading.

Nearly half of the 29 industrial firms with annual main business revenue of at least 20 million yuan in Wuxiang are not related to coal mining. Among them, six are involved in emerging industries, including photovoltaic and wind power generation, as well as equipment manufacturing, said Wu Wei, deputy director of the local bureau of industry and information technology.

Li Xiaobing, head of a calcium company in Wuxiang, has for over a decade witnessed the company transforming its business from quarrying to producing nano calcium carbonate — a new material.

“It can be used as raw material for making paper, plastic, and rubber,” Li Xiaobing said, adding that the first phase of a nano calcium carbonate production line with an annual output of 50,000 tonnes will be put into operation at the end of this year.

The flourishing emerging industries in Licheng and Wuxiang counties are fruits of a raft of support policies launched by China in recent years to boost the development of its old revolutionary bases.